A tent, a pigeon house, and a pomegranate tree

After the 2011 revolution, Egypt faced a challenging socioeconomic transition. Since then, the ICT sector has become one of the promising contributors to Egypt’s economic growth. In 2014, the Ministry of Communications and Information Technology announced the Social Responsibility Strategy in ICT, with an inclusive vision for using technology to integrate different societal groups to achieve equality, prosperity, and social stability. Such goals demand that technology professionals be equipped with user-centered skills to design for groups with various socioeconomic backgrounds.

As a response to these goals, in August 2017 we ran an eight-day HCI summer school for designing technologies to document intangible cultural heritage (ICH) in the northwest of Egypt. The school was part of a UK-Egypt institutional link, the Hilali Network, a Newton-Mosharafa project between the City for Scientific Research and Technology Applications (SRTA-City) and Kingston University London. The link aimed at advancing HCI education in Egypt by training 18 engineering students from Alexandria University to engage in technology design activities with members from the Bedouin community of Borg El-Arab.

The Bedouins in Egypt are an important tribal nomadic community who migrated to Egypt from the Arab peninsula hundreds of years ago, inhabiting the north and western deserts and the Sinai Peninsula. With increased urbanization in those areas, however, they have become mostly a settled community, at risk of losing social practices, oral traditions, customs, language, and identity, all associated with intangible cultural heritage (ICH). Digital technology has often played a major role in supporting documentation of ICH at risk of loss with Web-based material, increasing its access and dissemination. Our proposal was that the sustainability of such an approach could be harnessed to its full potential by supporting the participation of community members. This remains a challenge since ICH should be researched within each specific social, cultural, and technological setting. We therefore argued that a bottom-up approach to ICH could benefit from HCI participatory methods to engage communities with technologies.

The challenges we had to face were numerous and complex, including that our students had technical-oriented mindsets; they were less appreciative for the topics they classified as “humanities” and were reluctant to engage with community members in participatory activities. The latter challenge was surfaced in the ArabHCI network  as a common issue across the Arab world.

Before the school started, we discussed the project with community members who worked at SRTA-City. Some of them were familiar with scholars who had come to study some of their traditions. The participatory approach we intended to adopt was new to them. They shared the fact that they were participating with others; they were proud of their Bedouin heritage and recognized the risk of it fading away, as many of them currently attend modern schools and have moved to cities to study and work.

We designed the summer school curriculum so that students would gradually build a partnership with the chosen community, while the instructors remained as facilitators,  scaffolding and advising students throughout. The curriculum used interactive material emphasizing hands-on practice and learning by doing.

We used the Double Diamond design process model by the UK Design Council to structure the school activity. It is a four-stage model: Discover, Define, Develop, and Deliver, with every two phases forming a diamond shape. The first and third phases were exploratory, while the second and fourth were for narrowing the scope and defining focus. Every stage took roughly a couple of days in our curriculum. Lectures were used mostly in the first exploratory stage. In each phase, we had a “participatory moment,” where students worked closely with community members.

In the first stage, Discover, we encouraged students to take a conceptual leap from being the engineering student—who receives a well-defined problem to solve—to becoming a design-thinker—who is co-responsible for framing the design and sociocultural challenges. We introduced basic HCI concepts such as usability and user experience, and bottom-up approaches to ICH documentation.

The participatory moment in this phase was a trip we asked community members to organize for the students to learn more about Bedouin culture. We visited a “Nagae,” a group of houses for the same family, "El-Sanakra.” They set up a special Arabian tent for us which they normally do only for their festive events. The Bedouin culture prohibits young women from interacting with unknown males. Thus, the women visitors met the Bedouin women inside the house, while the men were hosted in the tent. The house itself was modern on the inside, with a flat-screen TV and WiFi connection. Everyone, including the oldest low-literate women, had mobile phones. The house featured the traditional “burj,” or pigeons’ house, that they use for their food and hunting falcons. The house had fig and pomegranate trees, from which they harvested fruit, as both crops that thrive in the desert climate. We were surprised by their modern lifestyle, which unearthed interesting discussions about fading traditions. 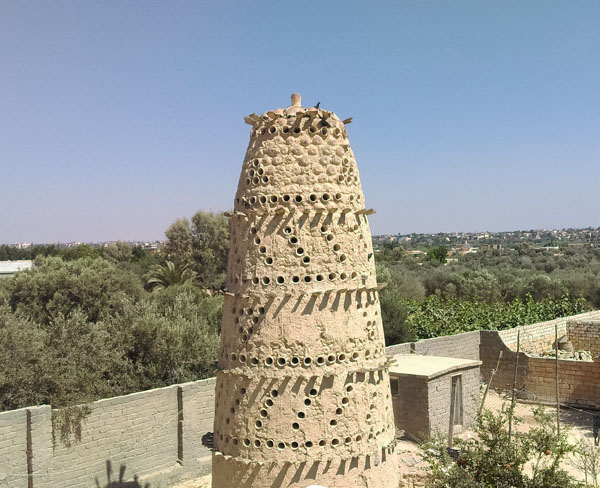 The pigeons' house, or burj. 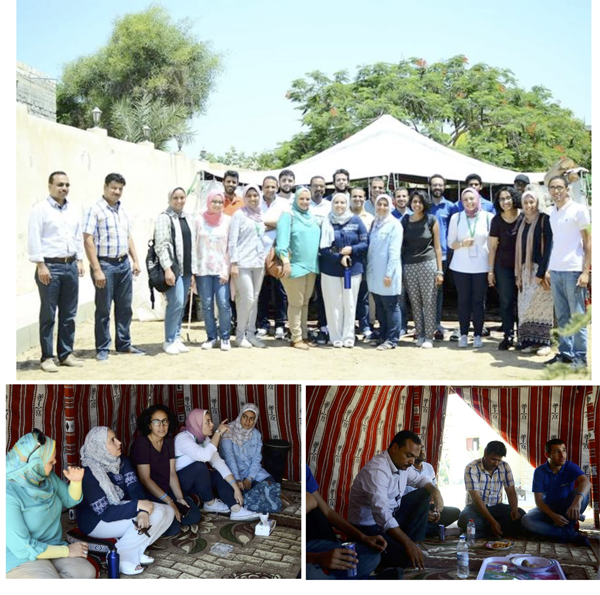 The Bedouin tent in Nagae El-Sanakra.

In the second stage, Define, the students were divided into teams. Each team had to define the scope for their projects (what traditions they would document, who would be their users, what the technical challenges would be). Some of the students had ideas based on the reports they collected during the field trip. We trained students in methods to help them understand their participants’ needs and perspectives (e.g., conducting interviews, ethnographic observations, culture probes). We asked the teams to design a two-hour workshop with one or two Bedouin participants to gather the information that would help them define their focus. Every team prepared a semi-structured interview and designed a probe as a family gift for their participant.

For instance, students designed a family tree, where the participant was invited to color its leaves according to the knowledge and interest in documenting a Bedouin poem. Another probe was a tent that had a box inside containing colored cards (colors varied according to gender and age). The participant was invited to ask members of his family house to write something about what makes them proud Bedouins.

In the Develop phase, the students used personas to describe their target users as they defined them in the previous stage. They analyzed the data they gathered from the interviews to find insights, identify opportunity areas, and brainstorm to generate ideas about potential solutions. Further, they conducted a second workshop to test their ideas, in which they handed over low-fidelity prototypes to one or two community members, who contributed to the design process. 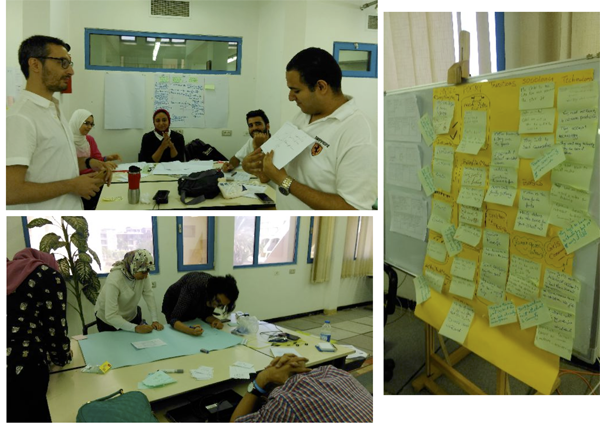 In the Deliver stage, students designed four prototypes for mobile applications. These prototypes included technology to address the documentation of improvised Bedouin poems, assessing the documenter’s knowledge about traditions. Other applications included using games to educate children about old Bedouin traditions and e-marketing Bedouin crafts. The prototypes were presented to community members, who gave feedback on the designs.

The experience was very positive for students and community members, as we learned in the follow-up focus groups. The double diamond model was a good framework to teach a user-centered approach because it guided the students on when they should adopt divergent or convergent thinking. The ICH case study proved to be invaluable in teaching the students to drop their assumptions about a typical computer user, which was quite a challenge for students immersed in 21st-century technologies. Probe design and persona tasks helped them think deeply about their participants. Further, they had to be attentive to user interface details, as the Bedouin community is fastidious about their culture. Overall, students tended to struggle with the design tasks that required data abstraction and synthesis (e.g., generating insights and themes from field notes and interviews) as these can take a long time.

More than half of the school activities were led by the students, so we prepared the assignments to help us reflect on students’ progress. We thus had to check their responses every day, which was very demanding. Watching them develop their sense of design agency, however, was our reward. We plan to revise our curriculum and intend to offer it as a resource for instructors interested in adopting our approach to student-led learning and sensitization to HCI as a tool for community-driven learning and teaching.

During the school the students maintained an independent blog reporting about their experience, which you can check out here.

Shaimaa Lazem is an Egyptian associate research professor at the City of Scientific Research and Technology Applications (SRTA-City). She completed her Ph.D. in HCI from Virginia Tech. She is interested in HCI in non-Western cultural contexts, participatory design, and decolonizing HCI. She is the cofounder of the Arab-HCI community (https://arabhci.org). slazem@srtacity.sci.eg
View All Shaimaa Lazem's Posts