The following is a review of recent publications on the issue of AI and surveillance and does not reflect Microsoft's opinion on the topic.

The term surveillance is derived from sur, which means from above, and veillance, which means to watch. Theoretical approaches to surveillance can be traced back to the 18th century with Bentham’s prison-panopticon. The panopticon premise involved a guard in a central tower watching over the inmates. The “omnipresence” of the guard was expected to deter the prisoners from transgression and encourage them to self-discipline. Today, the declining costs of surveillance hardware and software coupled with increased data storage capabilities with cloud computing, have lowered the financial and practical barriers to surveil a large population with ease. As of 2019, there were an estimated 770 million public surveillance cameras around the world, and the number is expected to reach 1 billion this year.

During the Covid-19 pandemic, we have been witnessing a massive global increase in surveillance as well. For example, technologies are used to allow people to check if they have come in contact with other Covid-19 patients, map people's movements, and track whether quarantined individuals have left their homes. While such surveillance technologies can help combat the pandemic, they also introduce the risk of normalizing surveillance.

China is home to the top surveilled cities in the world 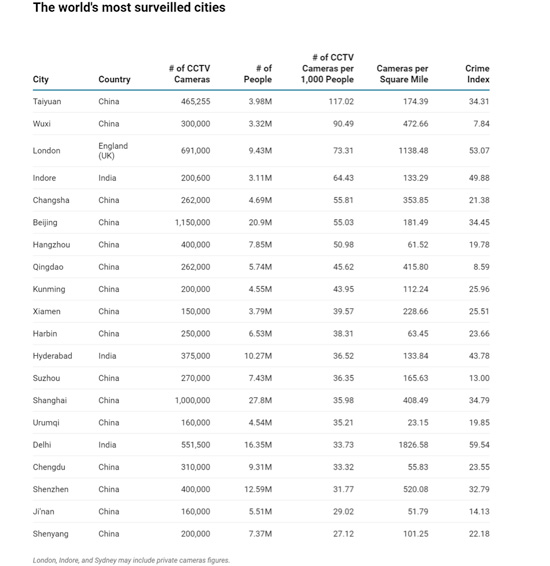 The 20 most surveilled cities in the world (cameras per person). Source: Comparitech.

Surveillance technologies are being deployed at an extremely fast rate globally. In fact, as of 2019, at least 75 countries were using various AI technologies such as smart policing systems, facial recognition, and smart city platforms for surveillance purposes. Every nation has a unique approach to surveillance shaped by its technological landscape and economic power as well as its social, legal, and political systems. As of 2019, China has installed more than 200 million facial recognition-powered cameras for various purposes, ranging from identifying thefts and finding fugitives, spotting jaywalkers, designing targeted advertisements, and detecting inappropriate behaviors in classrooms. In India, the Internet Future Foundation has estimated 42 ongoing facial recognition projects, with at least 19 systems expected to be used by state-level police departments and the National Crime Records Bureau for surveilling Indian citizens. Earlier this year, the Delhi police used facial recognition technology to track down suspects allegedly involved in violent clashes during the farmers’ tractor march in the nation’s capital. 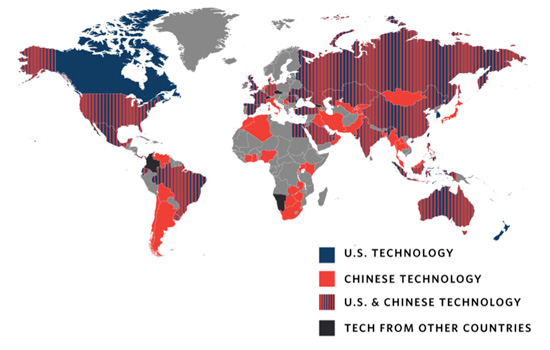 The growing reach and affordability have led to increased use of AI-based surveillance technologies in law enforcement, retail stores, schools, and corporate workplaces. Several of these applications are fraught with criticism. For example, several police departments in the U.S are believed to have misused facial recognition systems by relying on erroneous inputs such as celebrity photos, computer-generated faces, or artist sketches. The stakes are too high to rely on unreliable or wrong inputs. Similarly, this year, news of Lucknow police in Northern India wanting to use AI-enabled cameras that can read expressions of distress on women's faces when subjected to harassment was met with backlash, with civil rights advocates noting how it could violate women’s privacy and exacerbate the situation. Further, the scientific basis behind the use of AI to read “distress” was deemed unsound. In the education sector, a few schools in the U.S. are relying on facial recognition systems to identify suspended students and staff members as well as other threats. Civil liberties groups argue that in these scenarios there is a lack of evidence that there is a positive correlation between the use of the technology and the desired outcome (e.g., increased safety, increased productivity). Further, critics also contend that the investigation of petty crimes does not justify the use of surveillance technologies, including the creation of a massive facial recognition database.

Widespread use of new surveillance technologies has posed valid privacy concerns among the general public, in several nations. For example, a survey conducted by the Pew Research Center revealed that more than 80 percent of Americans believe that they have zero-to-very-little control over their personal data collected by companies (81 percent) and government agencies (84 percent). A 2019 survey conducted in Britain showed that the public is willing to accept facial recognition technology when there are clear benefits but want their government to impose restrictions on the use of the technology. Further, the desire to opt-out of the technology was higher for individuals belonging to ethnic minority groups, who were concerned about the unethical use of the technology. These findings demonstrate the need to involve the public early and often in the design of such technologies.

Recently, the European Commission introduced a proposal for a legal framework to regulate the use of AI technologies. As part of this, they have proposed banning the use of real-time remote biometric identification systems by law enforcement, except for a limited number of uses like missing children, terrorist attacks, and serious crimes. While the U.S. does not have federal laws regulating AI surveillance, some cities have taken restrictive measures around the use of such technologies by law enforcement. For example, San Francisco became the first U.S. city to ban the use of facial recognition by local agencies, followed by Somerville, Oakland, Berkeley, and Brookline. A number of companies, including Microsoft, have called for the creation of new rules, including a federal law in the U.S. grounded in human rights, to ensure the responsible use of technologies like facial recognition.

Arathi Sethumadhavan is the head of research for Ethics & Society at Microsoft, where she works at the intersection of research, ethics, and product innovation. She has brought in the perspectives of more than 13,000 people, including traditionally disempowered communities, to help shape ethical development of AI and emerging technologies such as computer vision, NLP, intelligent agents, and mixed reality. She was a recent fellow at the World Economic Forum, where she worked on unlocking opportunities for positive impact with AI, to address the needs of a globally aging population. Prior to joining Microsoft, she worked on creating human-machine systems that enable individuals to be effective in complex environments like aviation and healthcare. She has been cited by the Economist and the American Psychological Association and was included in LightHouse3’s 2022 100 Brilliant Women in AI Ethics list. She has a Ph.D. in experimental psychology with a specialization in human factors from Texas Tech University and an undergraduate degree in computer science.arathisethumadhavan@gmail.com
View All Arathi Sethumadhavan 's Posts

Esra Bakkalbasioglu is a design researcher at Microsoft, focused on AI ethics. Her recent research includes developing disclosure mechanisms in different domains. She has a Ph.D. in interdisciplinary social sciences from the University of Washington. esrabakkalbasi@gmail.com
View All Esra Bakkalbasioglu's Posts