Creativity limited by technology: Lessons from the past for virtual reality as a re-trending topic


I wrote this blog to remind young researchers who are surrounded by technology trends that, in the future, these technologies will change their form or may no longer even be mentioned. However, the holistic ideas behind them might be implemented by re-reading their past to create novel futures.

Re-reading is based on inspiration for generating ideas and their analogies. Sources of inspiration can include art, nature, urban life, people, digital content, and obsolete artifacts. Analogy establishes the relationship between these known sources and your unknown ideas. In this process, by re-reading, the essence of the existing approach or mechanism is determined and then adapted to the new one.

Re-reading has been often used in literature, music, history, and philosophy. Although the value of the re-reading method in idea creation has not been fully proven, awareness of it has been increasing. A very recent example of this is the Walking Assembly Project. In the project, the construction of Stonehenge (3,100 B.C.) was re-read, investigating how the building stones were carried by human hands rather than machines. New forms were then designed to provide similar opportunities. 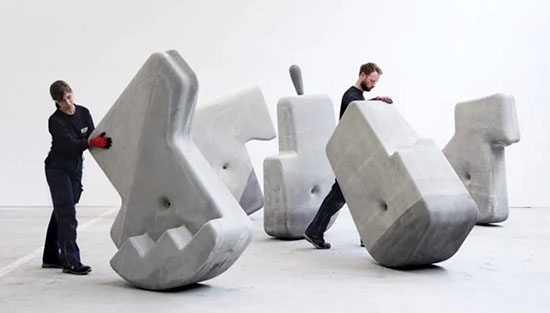 The Walking Assembly Project reintroduces the potentials of ancient knowledge to better inform the transportation and assembly of future architectures. (photo: Matter Design)

Thinking about the essence obtained by re-reading the existence of something shows that, in not being affected by existing technologies, re-reading might be a way to generate an effective idea, first to determine what the idea should be and then to search for how it applies to the technology of today and tomorrow. Without being under the spell of the limitations of available technologies, it is possible to create pioneering, utilitarian, and obtainable ideas that can be questioned far from popular view and considered outside the box.

From this perspective, there are many lessons to be taken from the past for virtual reality (VR), which has again become a trend. However, this trend follows a technology-limited perspective, in which the definition of VR is limited to the current technologies. On the other hand, throughout history VR has been shaped by non-realism, expressions of space-time, and optical illusions.

In the ontological analyses extending from the ancient philosophers to Plato, especially in architecture, reality is considered to be a sharp view and also a bad picture that prevents us from seeing what we actually want to imagine. Since then, a wide variety of illusions (or virtual realities) have been experimented with as alternatives. Those efforts reflect our dreams for alternative realities in design, especially architecture.

The first well-known example of the art of animation is thought to have been made in the Paleolithic Period. These are cave paintings in which an animal's movements are expressed. This discovery, made in France in the late '90s, reveals a time much earlier than the first zoetrope in the 19th century, which had been accepted as the official starting date of cinema technology. In this ancient period, early humans depicted animal figures drawn on top of each other. When you move a torch back and forth, it is possible to see an animation that gives the impression that the animal is moving. From what we can understand from this point on, the curiosity to express space-time has been with us since the dawn of humankind. 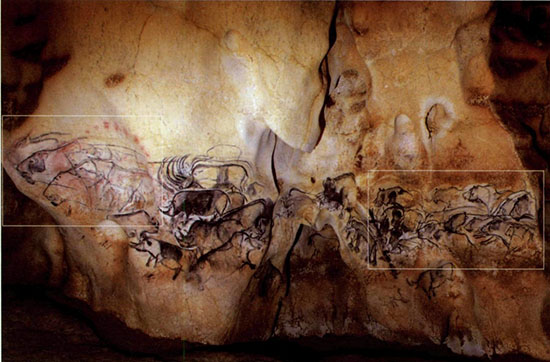 The expression of depth in space and of space-time is also a common element in ancient Egyptian paintings. However, the sense of depth that we understand today was obtained for the first time with the discovery of perspective in the 14th century. This was developed thoroughly in Renaissance painting as a two-dimensional medium, and later in the Baroque period. In the 16th century, the discovery that images could be projected onto a wall by optical techniques led to the innovation of photography. Then, as we all know, starting with the printed photograph, began a journey of development that extends to today's VR technology. Thus, over the course of history, a lot of studies have been done that give a sense of near-real depth, including stereography and the random-dot stereogram technique.

Returning to architecture, the design of spaces like those we might imagine Plato had in mind was an endeavor of the ancient Greeks. Perhaps the Pantheon is the most important first example of this. Within the technique called optical projection, the midpoint of the columns of the building facade was made relatively swollen compared to the head and lower ends, causing the columns to be seen without shifting into perspective when viewed from the ground.

On the other hand, in some old Roman or Baroque-period monuments, architecture was designed to create the illusion that short corridors were actually long, or that a flat church wall or ceiling was actually a dome.

Today, “realism versus non-realism” is also discussed by some designers, ignoring the limitations of current and possible future technologies. One of the current approaches is the manifesto called “transparent drawing.” According to this manifesto, a combination of visual expression, proliferating and complex information, perspective view, a desire to build, and a desire to be realistic has become a “gangrene.” This prevents the designer from holistic thinking; therefore, as humans, we must return to our “factory settings” as soon as possible. Otherwise, we cannot find out what we really want within the dizzying vortex of technological development. The authors warn us that our thinking will surrender to the flow of technology that we do not know. Transparent drawing aims to reveal the virtual dimension of our imaginary universe in a more transparent way by expressing what must be seen behind the realistic images in a drawing.

In a sense, this idea behind transparent drawing confirms the Wagnerian approach to holistic thinking in art. The concept of Gesamtkunstwerk (“total work of art” or “synthesis of arts”) proposed by 18th-century thinker Eusebius Trahndorff, was later in the 19th century questioned by Wagner, who wondered what the ideal relationship between music, text, and dance should be in a holistic structure. Wagner, in this thought, was discussing what kind of an illusion must be created that would force the human brain to look far beyond the opera. Even today, Wagner's ideas present a universal point of view that is still debated, and his arguments are triggers to explore the boundaries of creativity that leave out the technology, the existing conditions, and the molds. Such approaches run counter to current VR trends, which are based on current technological limitations. We have yet to fully respond to this holistic thought in current VR research and applications.

Instead, isn’t it better to re-read the curiosity and the ideas produced long ago?

One way of overcoming the technology-limited perspective on VR is to design a 101-level university course to promote this awareness that would be taken at the beginning of one’s academic education. My next effort will be to prepare and implement course content according to this vision of re-reading the past and to see the results.

Oğuzhan Özcan is a full professor and director of Koç University-Arçelik Research Center of Creative Industries, specializing in user-centered design and practice. He is supervising a number of research projects, publications, and book contributions relating to interactivity and design art. oozcan@ku.edu.tr
View All Oguzhan Ozcan's Posts

As is the case in many countries, Saudi Arabia has become the focus of increasing local attention from those interested in HCI research and practice. This increase is simultaneous with an increasing demand for HCI training and exposure that is not currently included on the national student curriculum in Saudi Arabia. It is essential that educational institutions can offer additional HCI support. This means that their research priorities must be widened, since there is a heightened importance of user engagement and user-centered design in this field. In order to give local students and young professionals extra opportunities and a more enriched curriculum, many HCI research groups provide HCI training. This exposure in the HCI field is crucial, and ultimately led to the establishment of the local KACST ACM SIGCHI chapter, made up of researchers, professionals, and students from all over the country. Members taking part in this can attend seminars, whereby they have the chance to share their experiences and engage in ongoing research, as well as being afforded a number of opportunities to network. It was due to the community’s positive response to these initial events that the Summer School was proposed and subsequently established. http://teachingonlineabc.com/