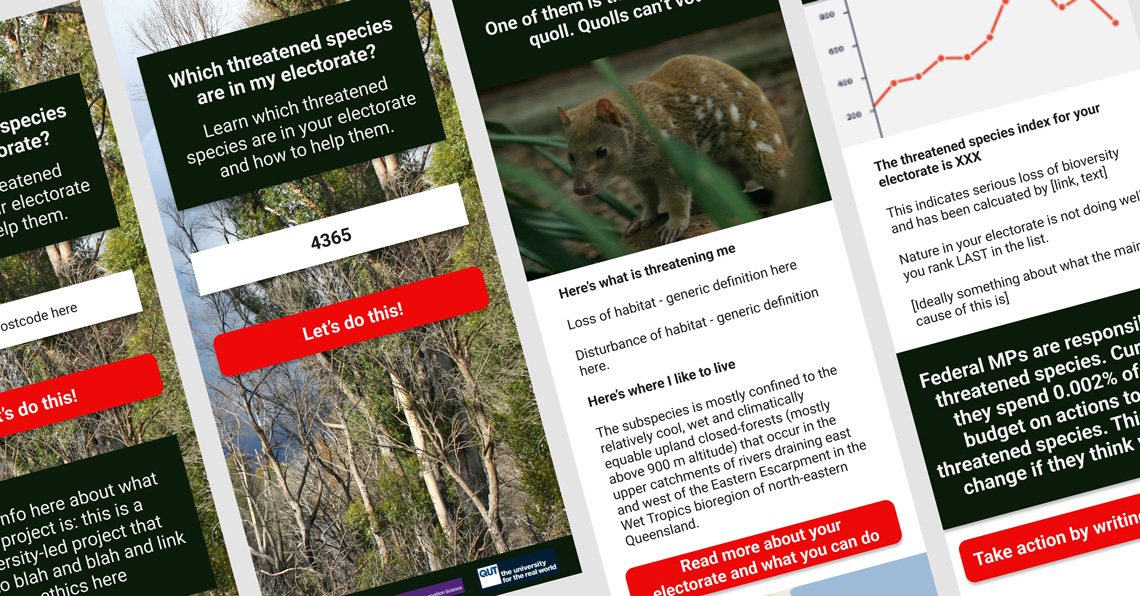 Australia—like much of the world—is facing a biodiversity crisis. Hundreds of species are in danger of extinction due to the destruction and degradation of their habitats. Populations of threatened species have more than halved since 1985. To have a chance at survival, these species require federal government recovery plans for funding and habitat protection.

The site Threatened Australians began as a discussion between a conservation scientist and an interaction designer who distilled the problem: We, as a scientific community, know so much about threatened species, yet there is no simple way for laypeople to connect with them.

The problem became a brief: There are so many government and scientific datasets about these species available. How might they be used to promote democratic action to save threatened species? A small budget was obtained through internal university funding based on a commitment to produce a website that took users through entering their postcode, to connecting in a meaningful way with local threatened species, to taking actions to help save them.

Cycles of functional prototyping—in Figma, then in HTML—and refinement were grounded in consultation with scientists, environmental advocacy experts, laypeople, and a group of friendly interaction designers.

The project is called Threatened Australians as a way of encouraging people to notice how the word Australians is used in everyday language—usually it refers only to people. The title of the projects asks an implicit question: Are all species Australians or just humans? It highlights the urgent need for politicians to represent all species within their electorates, not just Homo sapiens.

Nick Kelly is a senior lecturer in interaction design at Queensland University of Technology, Australia. His research looks at online networks and design cognition. His applied research focuses on ways that interaction design can contribute to teacher education, environmental education, and housing security. [email protected]

Gareth Kindler is a Ph.D. student at the University of Queensland, Australia. His work is concerned with biodiversity conservation and its intersection with the politics of resource allocation. [email protected]

James Watson is a professor of conservation science at the University of Queensland, Australia. He leads the Green Fire Science research group (www.greenfirescience.com), whose mission is to do applied research that is linked directly to the practice of conservation. [email protected]