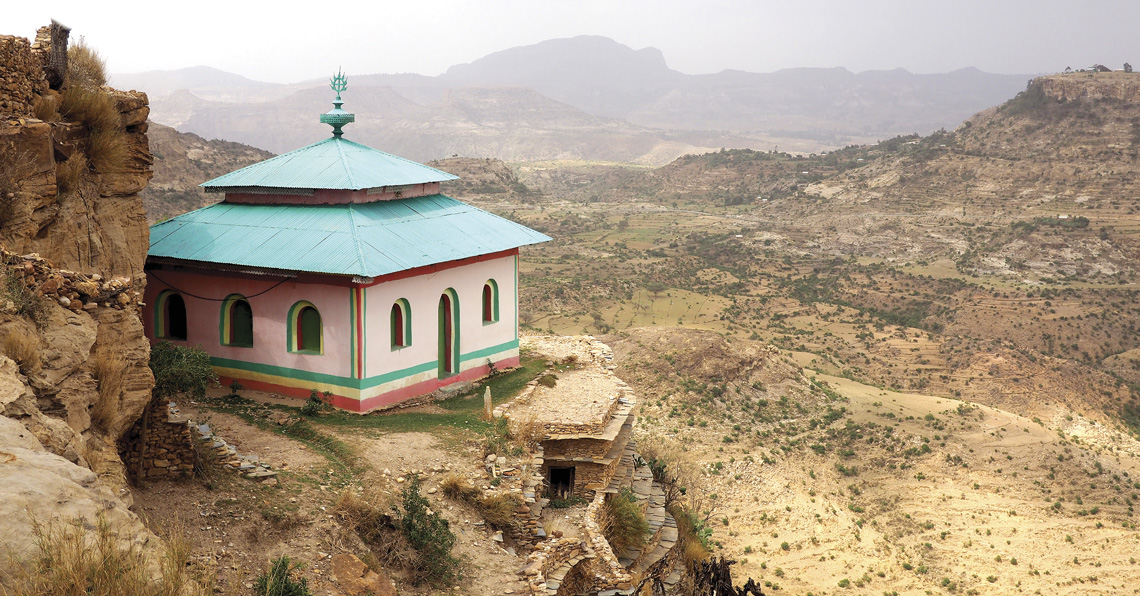 [T]o acknowledge our dreams is to sometimes acknowledge the distance between those dreams and our present situation. Acknowledged, our dreams can shape the realities of our future, if we arm them with the hard work and scrutiny of now.
— Audre Lorde

In August 2019, my mother and I spent four weeks in Axum, a town in the Tigray region of Ethiopia. It was my third trip back to Tigray after emigrating with my mother at age three. We visited Abuna Yemata Guh, a church in the sky of Gheralta; Debre Damo, a sixth-century monastery; and the small reservoir where my mother communed with friends. The reservoir is just a minute's walk from Mariam Tsion Church, where hundreds of people were massacred by Eritrean and Ethiopian soldiers in November 2020. Debre Damo was bombed and looted. Twenty-one people were shot in Gheralta's village, near the foot of Abuna Yemata Guh. Since November 4, 2020, Prime Minister Abiy Ahmed and his forces have systematically destroyed culturally significant sites across Tigray in an attempt to annihilate the Tigrayan people. More than 5.2 million people are in dire need of humanitarian assistance; over 2 million are internally displaced; 900,000 are living in famine; 70,000 have fled to Sudan as refugees; and up to 150,000 have died. From homes to hospitals to farms, Ethiopian and Eritrean troops have left no aspect of Tigrayan life untouched. I find it difficult to picture these places as sites of violence. I find it difficult to understand, in a material sense, what the Tigray genocide truly entails. A large part of that limitation is due to my distance as a diasporic Tigrayan in the U.S. With these limits of my understanding, I wondered how I could better understand where the Tigray genocide was taking place, and what significance those places hold outside of violence.

As a result of frequent communications blackouts since the start of the war in November, information regarding the lives lost in Tigray is sparse, but it has still traveled throughout the diaspora. People like my mother's friend travel the 133 miles from Tigray to Mekele on foot in the hopes of finding a working phone to share updates. That is how my father learned of his brother's passing. Comprehensive lists of victims and damaged sites are compiled from social media posts, news reports, and testimonies collected from refugees in Sudan. My current project, which is based on those victim lists, is an effort to document the sites of atrocities and destruction in the Tigray region. A map, by definition, is "a representation of the celestial sphere or a part of it" or "a diagram or other visual representation that shows the relative position of the parts of something." Mapping is more complicated than I first thought. I understand it better now as a tool of empire to define meaning and create legitimacy for its objectives: expansion, conquest, and profit. However, this map is not meant to merely memorialize violence and the deaths of Tigrayans in relative positions to one another. It is not meant to represent a far-off "elsewhere" where violence is inherent, acceptable, or commonplace. For now, the map is a tool to help those of us who are not affected materially by the Tigray genocide understand the material effects of the ongoing genocide.

The first iteration of the map will provide some social, political, and historical context to damaged sites and atrocities. First, we utilized the victim list from Tghat (meaning "being committed and dedicated to a cause"; https://www.tghat.com/about/), a website run by Tigrayans documenting the damaged sites in Tigray, as well as providing a running victim list and political analysis of the genocide. We integrated coordinates for each location where there was a recorded death, resulting in 444 unique locations. However, due to the proximity of the locations and the lack of available coordinates for many of them, the number of locations was consolidated. We will plot these sites along a timeline to offer context for the major political events leading up to November 4, the subsequent telecommunications blackout, and the atrocities committed at culturally significant sites. We began with plotting on QGIS, but that proved difficult because we have "too little data" to accurately create heat maps of areas with larger death tolls. We have just over 3,000 names of the estimated 150,000 people systematically murdered by the Ethiopian and Eritrean state. Where do we place their lives? How do we honor what we don't yet know we have lost? Maps work because we agree on the information presented—for example, the borders, the titles, and mapping metrics. But what happens when we map something disputed, unrecorded, or incomplete? Mapping Tigray is both vital and difficult. The ongoing violence has no official count—but what does official mean in this context? It's not that we need something official, but rather something complete, that allows each person to be remembered as they deserve to be. This is also a project for grieving, and for that, shouldn't we know the names of those we are mourning?

Institutions demand that the oppressed show proof of harm, damage, and loss. There is an unfortunate abundance of proof. I refuse to let this map be a part of creating something "believable" about the Tigray genocide based on "accurate" information. Tigrayan life and space refuses capture onto static coordinates. To reproduce the textured geography of life in Tigray, I designed a nonlinear user experience with video, sound, and 3D images embedded into the maps. I dream of a liberated Tigray, and though those terms have yet to be defined, I hope having an understanding of where we are can help map where we are going, which, hopefully, will be a future where Tigrayans live safely, on their own terms.

What happens when we map something disputed, unrecorded, or incomplete?

Salem Tewelde is a first-generation Tigrayan-American born in Axum, Tigray. She is organizing with the Tigrayan diaspora out of Oakland, CA, and her hometown of Denver, CO. salemhtewelde@gmail.com.