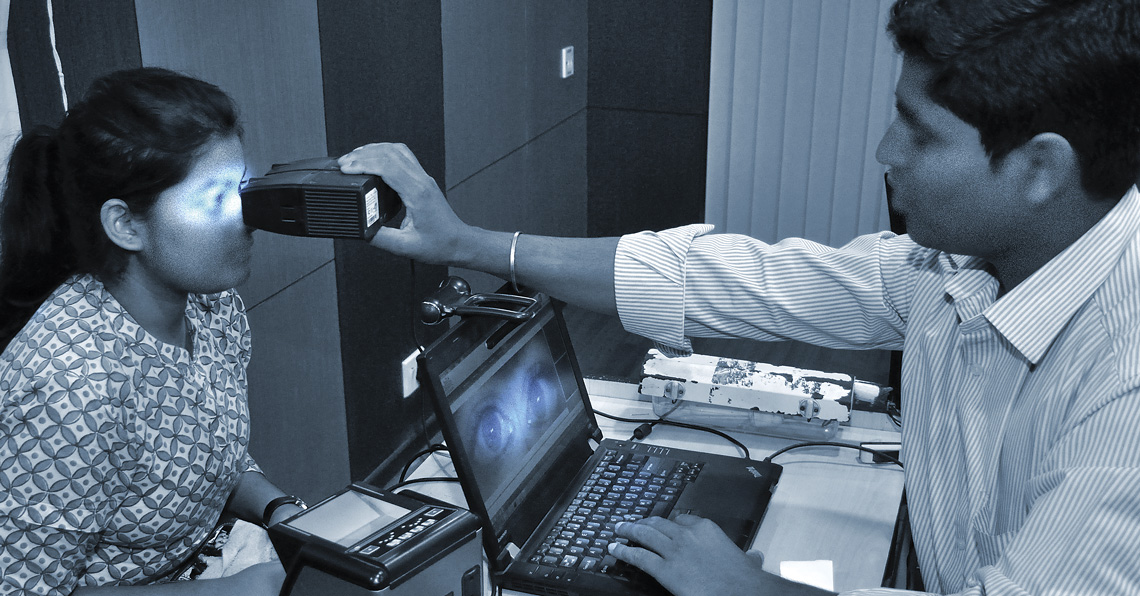 Aadhaar was established in 2009 as a national digital ID system to ensure the delivery of public welfare and essential services. The 12-digit Aadhaar number, intended to be unique to every resident, is created upon enrollment, which mandates the collection of biometric data (iris scan, fingerprint, and photograph) and demographic information (e.g., name, date of birth, home address, name of parents/spouse). As outlined by Vrinda Bhandari, the Aadhaar (Targeted Delivery of Financial and other Subsidies, Benefits and Services) Act of 2016 of the Indian Constitution sets Aadhaar's legal premise as a system "aimed at offering subsidies, benefits, or services to the marginalized sections of the society for whom such welfare schemes have been formulated" and "to plug the leakages and ensure that fruits of welfare schemes reach the targeted population, for whom such schemes are actually meant." Bhandari emphasizes how the government was not permitted to use Aadhaar for non-welfare public services and concurred that private actors do not usually provide welfare programs (hence, they are not allowed to use Aadhaar) [1].

Two frequently used methods of Aadhaar-based authentication are fingerprint scanning and sending a onetime password to a beneficiary's phone (phone numbers are also recorded during Aadhaar enrollment). It has been widely documented how the failure of any one of these authentication methods can result in the denial of welfare and the systemic exclusion of marginalized individuals. A lack and/or change of fingerprints is common for many people due to physical disability, old age, or years of manual labor, leading to authentication failure. Similarly, many people, especially women with no income, do not have their own phone number, and use phones either owned by a male family member or shared by the family.

India is home to about 200 million Dalits (heterogeneous ethnic groups historically and collectively referred to as untouchables in the Hindu caste hierarchy who are politically and economically oppressed by dominant upper castes), 104 million Adivasi (more than 700 indigenous groups), 195 million Muslims, 31 million Christians, over 26 million people with disabilities, 138 million people over age 60, 100 million migrant laborers, and more than 300 million who are illiterate. Individuals who have faced exclusion of varying degrees mostly find themselves in one of the above categories and/or another socioeconomically marginalized group.

Denying Aadhaar's key role in welfare delivery, multiple researchers, including Usha Ramanathan, argue that Aadhaar is used primarily for furthering state surveillance by "uniquely identifying" individuals and discriminating against minority communities [2]. In my 2021 documentary MarginalizedAadhaar, Ramanathan dismisses the role of Aadhaar's alleged role in enforcing national security, saying, "We have seen with the National Register of Citizens [NRC]. The one thing that we can significantly see it doing is it creates statelessness. The powerful have a utopia where they want certain kinds of people there. They don't want certain kinds of people. They want to discard them somehow. Now you're able to do all that [in] the creation of these databases" [3]. The NRC, a program that was touted to provide citizenship to Hindus, Buddhists, Sikhs, Jains, and Christians fleeing religious persecution in Afghanistan, Pakistan, and Bangladesh, helped authorities in the Assam state declare 1.9 million mostly Muslims, who are minorities, illegal. The biometric details of about 4 million people that happen to be relevant to Aadhaar were collected in Assam for the NRC exercise.

In a video interview for MarginalizedAadhaar, Ashraful Hussain, a civil rights activist who has since been elected to Assam's legislative assembly, says, "They took biometrics for all of them [Muslims], including those who were dropped from NRC and those who fought to be included. Aadhaar enrollment is not hard. But [authorities] can even strip one's rights using other means. One might not get their [welfare]" [3]. A year later, most of these 4 million people found their biometric data locked, barring them from even enrolling in Aadhaar or receiving any welfare [4].

In MarginalizedAadhaar, Sunil Abraham, a public policy researcher and advocate for free and open-source software, describes how biometric IDs are a nonconsensual and oppressive technology by design. He further highlights that using biometrics for surveillance and law enforcement, as well for e-governance projects, must be discouraged [3].

Usha Ramanathan and economist Reetika Khera strongly advocate for a radical shutdown of digital databases such as Aadhaar to stop authorities from identifying and monitoring marginalized groups and misusing their power to exclude them [3]. Abraham proposes replacing biometrics with smart cards to ensure some user consent and stop the contentless exploitation of privacy through biometric IDs. He also advocates using open standards at a foundational level to ensure greater public scrutiny of public entities [3]. Meanwhile, India's 2019 Personal Data Protection Bill, intended to provide a legal premise for the collection and use of citizens' personal data, has yet to become law. Its original drafter, Supreme Court of India Justice B.N. Srikrishna, fears that the current bill could make the government an "Orwellian state" [5]. India's constitutional stand on privacy as a fundamental right is too broad to regulate surveillance.

4. Singh, B. Aadhar enrolment for NRC applicants who provided biometrics to be decided by Centre, says minister. The Economic Times. Jul. 14, 2021; https://economictimes.indiatimes.com/news/india/aadhar-enrolment-for-nrc-applicants-who-provided-biometrics-to-be-decided-by-centre-says-minister/articleshow/84398849.cms

Subhashish Panigrahi is a co-director at O Foundation. He makes documentary films on and researches the decolonization of societies and languages, and open technology. subhashish@theofdn.org