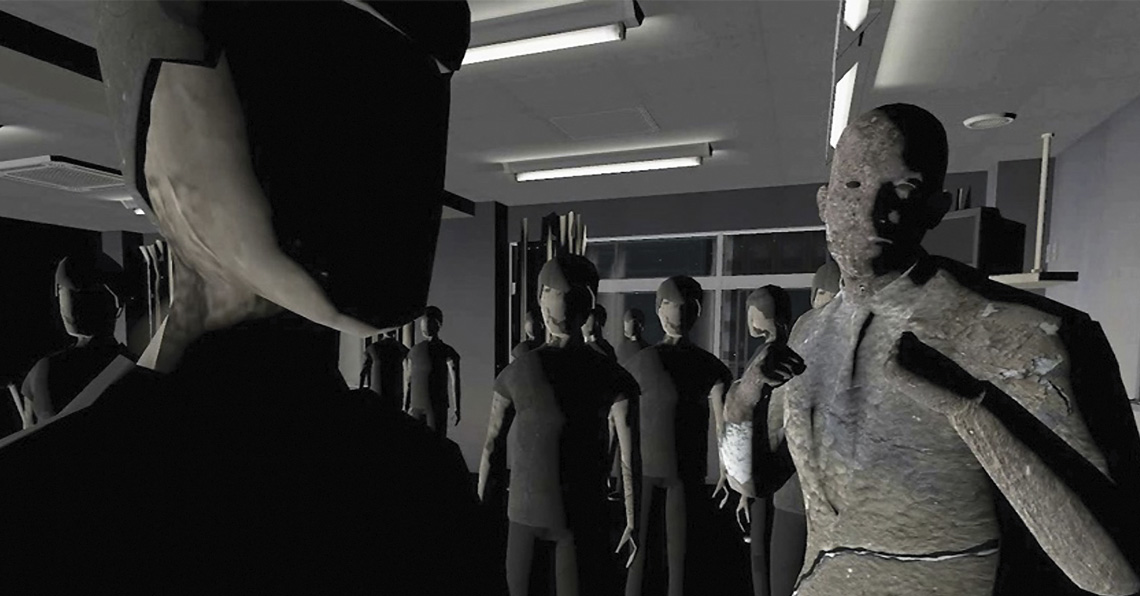 I worked with South Korean media artist Sungeun Lee to create the interactive VR artwork Sleeping Eyes. We used VR as an artistic medium to explore Lee's symptoms of narcolepsy and provoke reflection on the boundary between dreams and reality. We applied nonlinear narrative and gamification techniques to enable the viewers to actively explore the story. We also utilized a heart-rate sensor to visualize the viewer's stress states and make them aware of their own feelings about the artwork.

Sleeping Eyes was developed through a collaborative process lasting more than one and a half years. Based on my ongoing conversations with Lee about his narcoleptic symptoms, we decided to create a VR work about his condition. I found that his difficulty as a narcoleptic person was not simply about falling asleep uncontrollably. He also suffered from confused or "foggy" states, where he found it hard to distinguish dreams from reality. Further, I realized that his main traumatic experiences came not from the condition itself but rather from social violence in school and later in the army, based on his peers' ignorance about narcolepsy. In fact, he did not realize that he was narcoleptic until he joined the military for two years of service, required of almost all South Korean men. His memories of violence were often represented in his dreams, where he experienced considerable fear and anxiety. For this VR project, Lee and I decided to represent his dreams of high school and the army. We co-created the story, and I made the 3D environment and characters inspired by his drawings.

In VR, people occupy physical and virtual space simultaneously. As a person with narcolepsy, Lee is sometimes confused about whether he is in a dream or reality. When describing his worldview, he often compared it to "underdetermined" quantum mechanics, in that he is constantly shifting between states of consciousness with little control. We therefore created a story using quantum mechanical concepts a as a metaphor. Nina Rajcic, a physicist, advised on the story design to accurately convey these concepts metaphorically throughout the story.

We used VR as an artistic medium to explore Lee's symptoms of narcolepsy.

The collaborative process was challenging. Although I tried to understand Lee's symptoms by thoroughly researching narcolepsy, it was not something I could clearly grasp. The process of creating this project brought to the surface fundamental questions about the limitations of empathy. Many people have argued that VR is an effective tool for creating empathy; however, I contest that eliciting empathy is not so easy—it is much more nuanced and complicated. We cannot simply simulate other people's lives and share their perspectives using VR. As Emmanuel Levinas claimed, the other is inherently transcendental; we cannot easily encounter or understand the concrete other. We should accept the fundamental differences between us and should not reduce the otherness to sameness. I accept the fact that Lee's condition remains an otherness to me. At certain points, I decided not to simulate his inner world or attempt to present his narcolepsy but rather to be a mediator, avoiding common social perceptions and ignorance about narcolepsy. The artwork is therefore an intersubjective positioning between Lee and me.

Creating this project brought to the surface fundamental questions about the limitations of empathy.

Sleeping Eyes was produced in Australia at SensiLab, Monash University, and developed as a part of Sojung Bahng's practice-based research, supervised by Jon McCormack and Vincent Dziekan.

Sound and Music by Jinjah

Sojung Bahng is an award-winning artist, filmmaker, and researcher currently working as a postdoctoral research fellow at Carleton University in Canada. She explores cinematic media via digital technologies to reflect aesthetic and narrative experiences in cultural and philosophical contexts. [email protected]