Prehension: The Hand and the Emergence of Humanity By Colin McGinn (2015) How did we get from apelike creatures to modern humans with evolved rational thought, language, and culture? Colin McGinn adopts an atypical evolutionary philosophy perspective on the crucial role of the hand in human evolution. His journey looks back at how major advances in humanness (use of tools, language, intelligence) might be understood or derived from very gradual and incremental adaptations of the hand at the anatomical, cognitive, and behavioral levels. For example, he argues that branch clinging, object grasping, tool manipulation, touching, grooming, reaching, pointing, gesturing, sign language, oral communication, and social behaviors are somehow related, all tied to a continuous and ever-evolving usage of the hand. One hand action acts as an embryonic form (or preadaptation) for the next one, to be adapted, adopted, and most important, evolutionarily favorable, over time. McGinn's examination of the hand through the lens of philosophical paleoanthropology is admittedly speculative at times. Nevertheless, it's a beautiful hymn to the hand and its role in the development of humanity.

Machines of Loving Grace: The Quest for Common Ground Between Humans and Robots By John Markoff (2015) John Markoff explores the early days of the computing era when designers, scientists, engineers, and hackers fiercely set out to produce powerful new machines to benefit and advance society. The book dissects decades of hard work and phenomenal breakthroughs to either augment existing human capabilities (intelligence augmentation, IA) or simulate human actions and skills (artificial intelligence, AI). Despite years of rivalry and contention between the IA and AI communities, the two contrasting approaches are much alike in how they have fostered a continued effort to redefine the relationship between human and machine. In response to the current democratization of AI/IA advances and everyday-life applications (e.g., lights-out manufacturing, neural networks, autonomous vehicles), Markoff advocates for a careful consideration of what we ought to expect and desire from ever more capable, intelligent, and autonomous machines. It now seems opportune to question the forces, incentives, and justifications driving these new systems, and to re-examine what the personal, societal, and ethical risks or consequences of this quest are.

Markoff advocates for a careful consideration of what we ought to expect and desire from ever more capable, intelligent, and autonomous machines.

Touch: The Science of Hand, Heart, and Mind By David J. Linden (2015) Why does it feel so good to scratch an itch? Why is a large cold coin generally perceived to be much heavier than a warm one? How does a caress differ from a tickle? Our sense of touch is central to our everyday functioning and emotional well-being, yet we generally know very little about how it functions. In Touch: The Science of Hand, Heart, and Mind, David J. Linden offers an end-to-end account of our body's touch circuitry: how the low-level sensory receptors are connected through nervous fibers to particular regions of the brain, ultimately giving rise to particular sensations. The book presents a diverse mix of detailed medical and scientific findings tied to everyday human experiences, with thorough yet convivial examples and remarks. In spite of a relatively well-understood sensory system, Linden emphasizes that touch sensations are ultimately neural constructs tinted and influenced by past experiences, social situation, other sensory input, and emotional context.

Hyperactive by nature, Camille Moussette likes the blurry connections between humans, atoms, and bits. He completed his Ph.D. thesis, Simple Haptics: Sketching Perspectives for the Design of Haptic Interactions (http://simplehaptics.se), in 2012 at the Umeå Institute of Design in Sweden. He currently works at Apple in Cupertino, California. cmoussette@apple.com 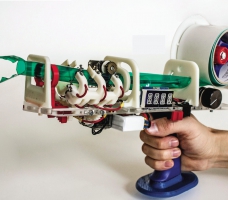 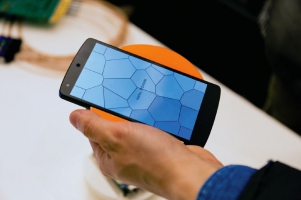 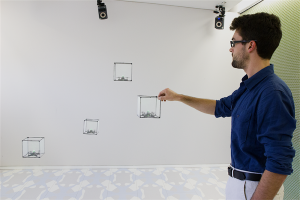 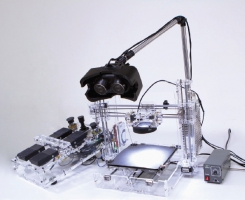 I-Eng: A Toy for Second-Language Learning