When I saw that the Chinese dissident artist Ai Wei Wei was to have a show on Alcatraz, I knew that I had to attend. Not only had I written three prior blog posts about his work and its relationship to criticism and freedom through design, but there was something immediately compelling about the idea of art from an artist that had been imprisoned situated in a notorious former prison.

When I started these blog entries for ACM Interactions, I called them “the background-foreground playground.” My plan was to talk a lot about the importance of what we treat as background and as foreground in design, and how bringing forward something that has previously been backgrounded can be a crucial contribution, both in design and in design research. And, of course, I thought that I would eventually get around to thoughts about the importance and mystery of background. Yeah, well, it hasn’t worked quite that way. Only if you look at my blog posts from exactly the right perspective can you see these interests.

So I thought, “Ai Wei Wei on Alcatraz! Of course!”

But then, my thought stopped short.

Alcatraz is, of course, an island in San Francisco Bay with a prison. But it is no Robben Island or Chateau d’If. Alcatraz’s most famous prisoner was the gangster Al Capone. Al Capone was not a prisoner of conscience, the victim of desperate circumstance, a freedom fighter, or a casualty of the brutal use of power. Al Capone was Not a Nice Man. Mothers felt their children were safer when he was locked up in an impregnable fortress.

So, the relationship between Alcatraz and Ai WeiWei is not actually obvious. What could the home of Al Capone have to do with prisoners of conscience? Perhaps the show was just a bad idea.

When I finally got my ticket and boarded the ferry, I was anxious to see what a great, but still fallible artist did with the setting. How did he make felt meaning?

The first experience, unhappily, consisted of announcements—on the ferry, brochures, a video, and a ranger talk—that over and over told visitors that the Ai Wei Wei exhibit was not about imprisonment but rather about the relationship between freedom and imprisonment. This fit with the National Park service slogan, “Alcatraz: More than a prison,” but it was not an auspicious start. The announcements struck me as sapping energy from the setting. There is plenty of dramatic natural beauty around the San Francisco Bay. Why visit Alcatraz if not to experience a frisson of horror? I wondered whether Ai Wei Wei even knew that these announcements frame the experience. Although he is not currently in jail, the Chinese government has not restored his passport, and he was not able to visit the site himself.

But maybe the tedious announcements serve some purpose. Perhaps people don’t like surprise. And surprise is what we get. 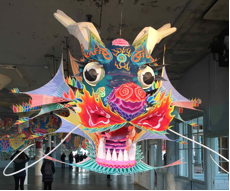 With Wind greets visitors head on, just above eye-level.

After hiking the 300+ feet upwards from the ferry, we walk into a large barren concrete room, formerly a prison work room. We are greeted by the huge head of a Chinese dragon kite. Its body follows, consisting of a sequence of round silk panels hanging from the ceiling, snaking perhaps a hundred feet back into the room. Each panel is gorgeous and different.

Eventually one notices that, integrated into some of the panels, are embedded quotations, in English, from prisoners of conscience. Many of these quotations are quite hard to read because they are embedded in other elaborate patterns. I have included a picture of one of the easier ones, which is, interestingly, from one of the few Americans, North Americans, or even Western-Hemispherians in the set. The cumulative impact of these panels is, for me, almost like a line of people, tied together but each with a unique and uniquely represented life, some glimpses of which are seen through the occasional words and names. We wonder what unknown and unspoken struggles are signified by the panels without words. 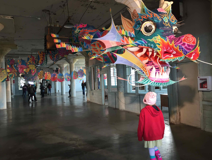 With Wind extends backwards into the space. NB: the drab cement of ceiling and floor look polished in this snapshot but they are not.

Around are other Chinese kites, many not unlike those that frequently fly on the greensward of the San Francisco Marina just across the Bay, but far more luxurious and primarily made out of silk, festooned with pictures of birds, mostly owls. I don’t think that the dragon kite could fly, but with its low-hanging head, it also echoes another tradition that has come to San Francisco from China: the dragons that twist and wind along the narrow streets in the parade every Lunar New Year, amidst the popping and smoke of firecrackers. The dominant feeling is celebration, freedom, joy, light. The piece speaks of transcendence.

Ai Wei Wei is concerned with prisoners of conscience. Because he is on Alcatraz, he does not have to say that transcendence is hard, achieved rarely, perhaps just a hope or a dream. The cement of the floor, ceiling and walls and the rusted, decrepit sink in the corner tell us that. The kites would be treacle in another setting, but Alcatraz makes them commentary. He establishes an altogether different set of background thoughts than the specter of Al Capone. 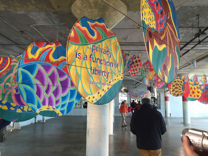 Three other pieces are worth mentioning. Just behind the kite room is another huge room, with 16 columns between the cement floor and the cement ceiling. On the cement floor lies a “graveyard” of images of prisoners of conscience, each consisting of a portrait made of Legos. As you walk amongst these Lego portraits, they are very hard to see. You have to actively struggle to see that which is in front of you. But if you photograph them, say, with your iPhone, all ambiguity falls away and only the clarity of the image is preserved.

Douglas Coupland made a similar point in some pieces in his recent Vancouver show: that which is complex in real life is simple when seen through the lens of mediation. But we could not see Coupland’s pieces except through mediation. The Coupland show caused us to question what we consider real.

Here the blurring is a different design decision addressing a different aspect of being. It is as if to say that the least that we, the viewers, can do is make the effort to see. Our view of prisoners of conscience is constructed.

Later, we have the opportunity to see the piece from prison guards’ gallery. Because we are farther away, the faces are clearer, but we see them through bars. They are at once more clear and less personal. The prisoners are accounted for. (Batya Friedman’s “The Watcher and the Watched” [1] tries to address this latter experience in relationship in CHI as well as other work harking back to Bentham’s Panopticon.)

The other two pieces that I will mention seem to me to move us into more deep engagement. One is explicit. There is an array of postcards, each addressed to a different living prisoner. People pick a postcard and sit in the prison cafeteria at long benches, each trying to imagine what to say to a real imprisoned prisoner of conscience. (Apart from sentiment, this has a pragmatic function of showing the governments that these people are not forgotten.)

The last piece engages more explicitly with the prison location, but by now (if your reaction resembles mine), we are far beyond “othering,” the frisson of fear and interest we might feel with respect to a gangster, his gat, his moll, his rolling walk and big cigar. We are ready to be sad, and real, and from a place of real sadness, respect principled resistance.

A cell at Alcatraz, playing the words of Iranian poet Ahmad Shamlu.

Twelve to fifteen cells in the oldest, smallest, dampest, most decrepit wing of the main cell block are associated with audio clips. The slight contextual change of entering the cell now puts us into the experience of prison. No one would voluntarily spend time in these dreadful spaces. Yet, when entering the cell, we are able to hear music and poetry associated with a prisoner of conscience, as if in the dream space that they might have created. Toxica’s grating sounds and anarchic hostility brings vivid people and events of creation into the space of its particular cell. So, too, does Pussy Riot. So too does the poetry of Victor Jara or the songs of the Robben Island singers. Each recording makes a place in the way that Steve Harrison and I described in "People, Events, Loci" and that Jonas Fritsch talks about in his dissertation on affect and technology [2]. Each space has meaning, and the meaning is stronger because music, like life, moves quickly from experience to memory.

This is the most expansive piece in the sense that it includes words and music from around the world and across time (although most of the singers are dead or musical groups defunct). The Czech Republic is, for example, represented both in resistance to the Soviet Union, by Toxica, and in resistance to the Nazis by Pavel Haas’ Study for String Orchestra, written and first played in the Terezin Concentration camp. The piece shows us digitized sound, in some sense, in that each experience is cataloged into its own place in the cell block, which can be seen as an array with three rows and about 20 cells in each row. Yet, despite this digitization, the piece is also transcendent as a totality.

So far my blog entries have backgrounded issues of background-and-foreground. @Large: AI Wei Wei on Alcatraz succeeds in foregrounding them.