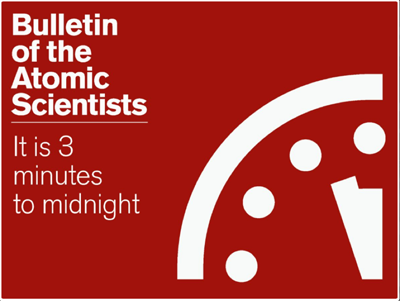 
Speaking of the Apple Watch or iWatch, as it is called informally...Time is running out...

Many decades ago, people around the world learned of the Doomsday Clock (maintained since 1947 by the Bulletin of Atomic Scientists, and referred to indirectly in the movie Dr. Strangelove, which spoke of the Doomsday Machine). The clock, poised at about three minutes to midnight, summarized estimates of how close humanity was to a global nuclear holocaust.

Thankfully (?) we have other challenges to consider these days in addition to nuclear proliferation and the threat of nuclear war. Alas, people do not think enough about these challenges in a way that might move them to inform themselves more and to lead them to action.

Of course, one can debate forever about what are the worst calamities awaiting human civilization. Don’t forget that in the 2013 remake of the science-fiction classic The Day the Earth Stood Still, Klatu came to the planet earth to save the earth from its human population—not to save us, because humankind had demonstrated to another civilization beyond the earth that it was simply incapable of managing the earth in a beneficial way. Let’s hope that we can do better than the miserable scorecard implied by the movie.

Let’s also avoid unproductive name-calling and blame, and simply concentrate on “What do we have here?” and “What can we do to improve things?” If you asked me for a quick list of major challenges/issues, I might list the following, not necessarily in order of urgency or impending doom:

Solar power: To provide sustainable energy, we must solve a way to make use of the abundant energy given to us daily by the sun. There is simply no excuse. Yes, big oil companies may experience some technical difficulties, but the long-term benefits are indisputable. A project I worked on in 1978 focused my attention on visualizing global energy interdependence. We have made some positive steps, but we are in need of much more progress.

Desalination of the oceans to provide drinking water: Another project we did for SAP a few years ago focused our attention on the crisis facing all megacities of the earth: they are depleting their underground water tables and will run out of drinking water in a few decades unless something drastically changes. We have abundant oceans that cover about 70% of the earth. There is simply no excuse. We must solve how to create easy, simple, inexpensive, abundant desalination processes that can be undertaken wherever feasible.

Race/religion/gender equality: Recent events in the USA have uncovered racism that was thought to have been minimized in past decades. The USA is not the only place to suffer from persecution and punishment of people because of race, religion, and gender orientation. News from many other countries tell of horrible acts, unfair laws, and lack of justice. There is simply no excuse. We must do better.

Nuclear war: The Doomsday countdown may have changed, but it has not disappeared. Negotiations with Iran and with other countries bring our precarious hold on global safety to our attention. There is simply no excuse. We must do better.

Education for all: One of the best solutions for long-term equality, prosperity, and peace is education, for all. Yet UNICEF estimates that about 100 million children have no access at all to education, with more than half of these girls. People cannot get access to even the rudiments of a suitable education. There is no excuse. We must do better.

Perhaps you can think of 1-2 others that belong at the top of the list for multiple Doomsday Clocks.

Which brings me to the iWatch. Like the ipod, iPad, and iSomethingElse, all of these products focus on the individual consumer—on the hedonistic pleasure of that individual’s life. Apple frequently touts a display for its new watch with many colorful circles/signs/icons/symbols, almost like a toy, or a reference to some Happy Birthday party with colorful balloons. All well and good. Yet there is a different approach possible.

Our work at AM+A for the past five years on persuasion design and our Machine projects (to be documented in mid 2015 in Mobile Persuasion Design from Springer UK) taught us the value of dashboards as a key ingredient (together with journey maps or roadmaps to clarify where we’ve come from and where we are going, focused social networks of family and key friends, focused just-in-time tips and advice, and incentives) to keep people informed and motivated for their journey...to behavior change.

And what journey am I considering: humanity’s journey through history and through our very own lives, each day, for all of us. I think we need to be reminded more of our Membership in Humanity.

I propose that we don’t need so much of an iWatch as a WeWatch...with a Dashboard of Humanity, that would constantly be the default display on our wrist-top device (of course, with the local time discretely and legibly presented) to remind us: Where are we? How are we doing? How much time does humanity have left?

Perhaps it would be a star chart with five to seven rays, or just five to seven bars of a bar chart. The position, length, direction, and colors would become so familiar to us that we could “read it” easily, and detect immediately if something ominous or propitious had recently occurred, and it would be the gateway to exploring all the underlying details that might motivate us and move us forward on our own personal journeys.

Perhaps it would be something that could be made available by the manufacturers for all platforms, all price ranges, from the most humble to Apple’s new $17,500 luxury version of its watch for the “0.1 Percent Users.”

Yes, showing the time is important. But so is showing the future of humanity for all of us on earth.

Yes, the latest stock-market report is important. But so is showing the future of humanity for all of us on earth.

Something to consider in thinking about the next “killer” app for humanity...as Apple prepares to release its new watch.