I’ve heard the future of interaction


Recently, I watched, or rather, more specifically, heard, the movie Her, which features Joaquin Phoenix in the lead role of Theodore Twombly (now, there is an introvert’s name), a somewhat sensitive, somewhat appealing, caring, but almost terminally asocial techie writing handwritten personal letters for others in a cloyingly clean, modern, antiseptic office in a made-up future Los Angeles that mixes in urban scenes shot in the sci-fi downtown of Shanghai.

The other lead character is the memorable “operating system,” the on-the-spot, self-named Samantha, which Scarlett Johannson voices. She gives the primary virtual role all of her slightly squeaky, breathless, ever-so-seductive, quirky, almost always good-humored all to impersonating a machine-system impersonating a person. Who wouldn’t want to enjoy Scarlett Johansson speaking personally and directly to them?

Spike Jonze (born Adam Spiegel on October 22, 1969) directed the film. His work is much known in music videos and commercials, but he started his film-directing career with Being John Malkovich (1999). Jonze is famous for his music-video collaborations with Beastie Boys, Björk, and Fatboy Slim. He also was a co-creator and executive producer of MTV's Jackass and is part owner of skateboard company.

Why the details? Well, I was struck dumb by this film in many ways, and it caused me to ponder its meaning.

I took two of my designer/analyst interns with me who are helping my company research and design our latest mobile persuasion project called the Marriage Machine. I thought this view of possible future “committed couples” and couple communication might turn out to be inspiring, or at least challenging. They are young professionals in their late 20s from Brazil and Singapore. They liked the film. Of course, almost all the characters in the movie were exactly the same age: 25-30.

I also went because I continually update my lecture about “User-Experience in Sci-Fi Movies and TV,” which causes me to sit through a series of mind-numbing action adventures shot primarily in the colors blue, gray, black, and white, with occasional warm colors for explosions. I was curious to know what I would discover in this film Her.

It might have been called Heard. The film had the excruciating cleanliness of people, social interactions, interior scenes, and drama of a California Disneyland theme park, an Epcot International Pavilion I remember from Disneyworld in the 90s, or perhaps a Heineken beer commercial.

Everything was visually cleansed and limited, devoid of extreme emotions, somewhat like the parenting game depicted in the movie itself, or like early computer-graphics animations—not quite right, not convincing, clearly artificially staged. Perhaps I had been overly influenced by two recent outstanding movies showing family interactions full of violent emotions worthy of classic Greek tragedies (Nebraska and August: Osage County) and truly creepy landscapes of people and cities/countrysides, and a full range of ages of human beings. Her depicts a wondrous world of the future somewhat like the House of the Future depicted at the World’s Fair in 1964.

In thinking it over, this film, in relation to Nebraska and August: Osage County, is an amazing contrast, much as 2001 and Clockwork Orange, two views of the future, one utopian and the other dystopian, circulated in movie theaters worldwide in the 1960s. Her presents a fantasy world something like those of the Fred Astaire and Ginger Rogers movies of the 1930s and 40s, at least until the end.

What is intriguing and important about the film Her in terms of human-computer interaction is that it is almost entirely accomplished through voice communication. Gone are the transparent screens of Avatar, the three-dimensional multi-colored displays of Pacific Rim (with meaningless white digits streaming vertically to the right of all major control console displays). Except for some brief amusing scenes of three-dimensional leisure games featuring maze-searches and some minor finger-twitching control by Theodore, and a few brief glances at his (small-screen!) mobile phone, the primary communication between human being and artificially intelligent “Agent Super-Siri,” known here as Samantha, is voice via a small (mono, not stereo!?) earpiece.

The effect is breathtakingly effective.

Samantha can see what Theodore is seeing, not through Google-like glasses (which he wears!, but perhaps this was an undesired product placement) but through the bricoleur’s technique of fastening a giant safety pin through his left-breast shirt-pocket (he keeps Samantha close to his heart) so the phone camera peeps over the shirt-pocket’s edge. This positioning is, no doubt, an homage to the slide-rulers, mechanical pencils, and plastic shirt protectors of engineers of past decades. I think of this image because I used to wear exactly such things in the 1960s. 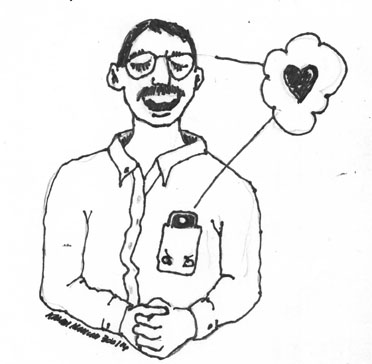 The author’s memory-summary of the movie. In addition to being a pioneer of computer graphics, Marcus is also a published cartoonist and worked as such for his undergraduate humor magazine.


If you close your eyes during this movie, you probably would get its full effect. The movie is a radio program of the 1940s on steroids. In one memorable scene of joint virtual sexual relations, in fact, the screen goes discreetly (and mercifully) black, allowing us to hear the blissful pantings devoid of distracting visuals, and all the more intense. This blackout moment in a movie is quite remarkable, like the one sound effect in the recent modern silent-movie The Artist. Here we feel the full impact of audio, not visual, communication, and what words, music, and other sounds can accomplish. In general, please recall that most of our modern software applications are silent movies, most without even piano accompaniment. As a side comment, I was struck a few years ago, in reviewing the latest computer-science student projects from the University of California at Berkeley, that few, if any, projects featured sound, even those that easily could have benefited from such investigations. Most of the students, as in other techie-generating nurseries, are growing newbies oriented to computer graphics alone, not computer audio. We are in an age deeply influenced by visuals, to be sure. This movie reminds us of the power of audio-interaction.

The conceptual play between the two main characters, which is intriguing, punctuated by brief, frustrating, limited encounters with real friends (no family, only god-children, etc.), makes up the limited drama of this short play or short story or MTV video turned into a two-hour (126 minutes, to be precise) movie. In between, Theodore witnesses Samantha, who apparently has just been released to the public, gain more and more insight into being human, to its (her) delight. Gradually, Theodore realizes that Samantha as Sam, perhaps, or Samanthat, is simultaneously communicating personally and no doubt provocatively with about 8,000 (or was it 80,000) other souls, and has about 600 simultaneous lovers such as Theodore. Theodore is shocked, shocked at such activity—he who writes simulated personal letters for others. The mock irony of it all is amusing and a bit transparent, but makes for tepidly heart-warming drama. In the end, we learn that Samantha has other agent-group friends, and eventually says goodbye to Theodore (and to other “clients”) as she goes off to join her other AI friends in a space that is beyond words to explain, and to which Theodore is invited to come join when he is sufficiently “advanced.”

At least, and at last, the film depicts a possible future for technology. Some of us feel left behind by its complexity. This film presents a bizarre variant of the global computer network, Cyberdyne Systems’ Skynet, in the Terminator films, gaining self-awareness on  August 29, 1997 (we’re a little late, actually). Here, we are abandoned by technology, which finds human beings interesting, but eventually boring and limited in comparison to what AI-augmented Super-Siris can find elsewhere. The human race has been jilted.

Well, that is one possible future. There may be others. I hope so. This irksome, slightly annoying, but clever film manages to raise some intriguing ethical, philosophical, sexual, human-communication, and human-relations issues in a novel way. For example: When will the USA legalize human-robot/android/operating system marriages? Will California, home of Google’s self-driving cars, be among the first states to grant such status?

What is the appropriate way for a Super-Siri to age when the human partner eventually ages...and dies? What happens after the user’s death? Just recycled bytes? Or, can the virtual partner inherit wealth, children, circles of friends, etc. Would the virtual widow/widower be asked to the funeral and later to parties among the deceased’s family and friends? For how long? Generations?

Would the Super-Siri be sad? Can computer systems be sad? Or happy? Or angry? Or just convince us with Turing Test effectiveness such that the questions are moot?

Did Samantha adjust her personality and voice from the start to meet Theodore’s needs? Are his friends, who may also be connected to Samantha/Sam, also being treated to cleverly pre-designed voices and personalities based on the individual listener’s siblings, first-sweethearts, or our mothers? What would Freud have to say about all of this?

What would augmented reality provide such a scenario? Would it lessen its intensity to have a virtual Super-Siri always present in the scene, or would this be a bit creepy? I suppose the desirability varies among persons and personalities.

What are the cultural, age, gender, and other variants that might affect this scenario? The movie featured occasional Asian people, but was almost devoid of Hispanics, African-Americans, and others. How would this scenario play out in China or India?

Why, in the age of earbuds, was mono audio used, even forgetting augmented-reality glasses? Was this a striving for a retro look or style?

Many other questions could be raised. These are a few initial ones.

In the end, I cannot help but feel I was looking at a promo for Life in a Silicon Valley Youth Village at some future Disneyland. I have a strong suspicion that I was exposed and advanced product-placement for future mobile/cloud services in a two-hour advertisement. Certainly, this style is in keeping with Spike Jonze’s oeuvre. Perhaps Apple secretly sponsored this Super-Siri ad pre-Super-Bowl, in preparation for its next breakthrough announcements, in honor of the Mac’s 30th birthday, or in honor of its memorable 1984 Superbowl ad for the Mac. That might explain the absence of Google Glass...and the emphasis on Super-Siri.

Well, enough said. This provocative film Her obviously inspires more talking and listening...about humanity. Can you hear me now? I hear what you are saying, Spike Jonze.