Among being organized, possessing strong communicative skills, having an ability to interface with people, and being able to be creative under pressure, the ability to meet a deadline with a satisfactory outcome is a cornerstone of current work life. Continuous procrastination is the opposite of keeping deadlines. A consistent ability to meet deadlines signals something profound about a person’s professional capacity and ability to function in contemporary work settings. If deadlines are repeatedly violated, things will get worse for you. The popular stories of modern geniuses support the general grand narrative of the high-energy entrepreneur who manages networks of people and travels like a well-lubricated machine. In that machine there is little room to fail to meet deadlines. We believe this holds true for many interaction design professionals (and designers alike). Much value has been generated with that skill set, and will continue to be delivered with that skill set. 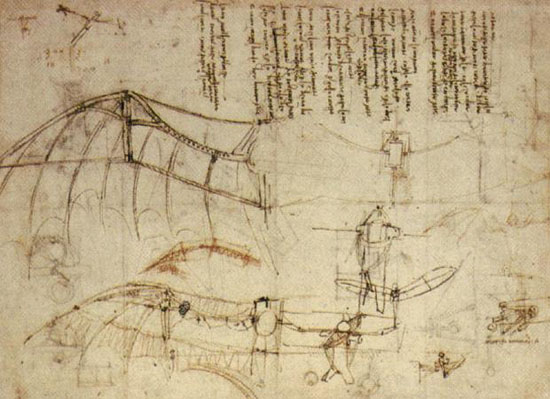 Design for a flying machine by Leonardo da Vinci

In this short text, we will take a closer look at the life of a pioneer designer, artist, and polymath—Leonardo da Vinci. Not only is it timely to remember da Vinci, given it’s been 500 years since his passing in May, 1519, but also his life and career may also serve as an illustration of more timely questions regarding contemporary design work. We ask ourselves: How would the output of Leonardo da Vinci be valued in today’s work environment? Evidently, this is a speculative and anachronistic question, but it forces us to systematize da Vinci’s artistic portfolio and take a closer look at the available records of da Vinci’s life.

An obvious approach to get a glance of da Vinci’s production is by means of an online image search. Seen across a lifetime, viewing his artistic work may generate an impression of a highly prolific professional and artist. Looking beyond self-portraits and the iconic Mona Lisa, the faded paper sketches miniatures on Google Image may create an impression of a consistent production in an equally consistent artistic medium—paper. Turning to alternative records of da Vinci’s life, the available sources are less than one would expect. One of the more important and recognized biographies to da Vinci’s life is the work by Giorgio Vasari (1511–1574), often referred to as the first art historian. From Vasari we learn that “Leonardo started so many things without finishing them.”

Directing attention to the contents of those faded papers, da Vinci’s creative production spans a wide range of outputs: paintings, sketches for aerial vehicles, weapons, sheet music, and exploration of human anatomy. Da Vinci’s production as a painter reveals an alternative narrative to the one of being highly prolific. Adding up da Vinci’s lifetime of individual pieces of finished paintings lands in the range of 15 to 20. A telling story dates back to 1480, when Augustinian monks in Florence commissioned da Vinci to paint the Adoration of the Magi. Da Vinci took off to Milan and never finished the commission. Consequently, it was handed over to another painter to complete.

In current parlance, da Vinci fits well into the description of an apparent procrastinator— someone avoiding finishing a task that needs to be completed. It also raises an unnerving doubt as regards to his ability to fit into today’s work environment. Given these shortcomings in his creative production, are there alternative frames to deconstruct and understand da Vinci’s output?

An alternative to describing da Vinci as a procrastinator is to view his artistic career as one of  “a series preparatory studies” crossing into seemingly unrelated disciplines and domains. For example, we also know da Vinci as an inventor of aerial devices, a bicycle, ingenious gadgets, and even war machines. His interest in the human body and anatomy has not passed by unnoticed, nor his interest in conducting scientific studies and experiments.

This experiential attitude of da Vinci resonates well with the mindset among contemporary designers that experimentation across artistic genres should be the modus operandi for any designer. But there’s a wider point to be made here—one that stretches beyond experimentation across artistic domains. Conventional understanding of skills and abilities hinges on conventions, or a set of underlying assumptions, held within a specific domain. What may come across as an unrelated idea or practice from the standards upheld in one domain comes into a different light when projecting them along the periods of da Vinci’s life. The ideas and skills generated from da Vinci’s wide range of interests and curiosity developed meta-abilities and opportunities for cross-fertilization that are historically unrivaled. Da Vinci informs us about the possible bounty of moving into more unchartered territories—ones that are not necessarily considered artistic or design-focused.

Even though it may come across as stretch to our anachronistic thought experiment, we couldn’t resist the temptation to think about a possible answer to the initial question: How would the output of da Vinci be valued in today’s work environment? In school, he might at have come across as absent-minded. Upon graduation, his age peers might have considered him somewhat of an outlier. As he faced a professional recruiter later in his life, da Vinci’s portfolio and career choices might have come across as a broken curriculum. Most likely, da Vinci wouldn’t even be called to an interview in the first place. There is also a chance that da Vinci would respond more opportunistically—maybe by role-playing his way into convincing the recruiter of his worthiness, but that doesn’t really fit the character of da Vinci. He would already be on his way Milan before even receiving his well-articulated rejection for a job interview. Da Vinci probably never even considered himself a polymath or inventor, nor was he around to be acknowledged as a global genius.

It could be the case that current educational and professional structures would have absorbed and further developed da Vinci’s ongoing “studies,” but that’s not the point of thinking about da Vinci’s life in terms of a broken curriculum. The point is his seemingly relentless adherence to the principle of “experimentation and curiosity first,” even though it compromised commissioned obligations.

For most of us, active procrastination is not advisable. Systematic procrastination will not develop our abilities as designers or further our professional ambitions. But—and even though the iconic status of da Vinci as a genius is reserved for a handful of individuals over centuries—we still think that da Vinci's life raises some important questions on current design work. While structures and institutions—be they in the form of design agencies, corporate settings, research communities, or professional associations—create fairly stable operating zones with a set of “rules of the game” that the members can use to their benefit, the same structures may confine and inhibit the same members from further leveraging their skills and abilities. The story of da Vinci tells us, as designers and leaders in a wider sense, to consider and challenge those taken-for-granted institutional boundaries.

Markus Lahtinen holds the position as Lecturer at the School of Economics and Management at Lund University in Sweden. markus.lahtinen@ics.lu.se
View All Markus Lahtinen's Posts

Nice one, my lifestyle is like Davinci, curiosity first, always learning.
and i dont really fit on the corporate game. so i dont work. constantly learning and experimenting! cheers!