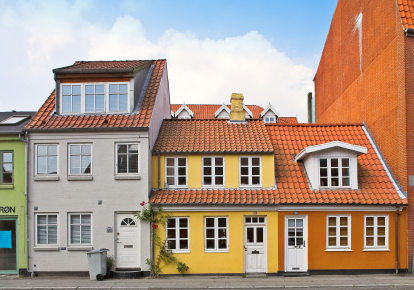 I am spending my sabbatical at Aarhus in Denmark. Aarhus is quite a hub for design research activity. DIS 2010 was held here; the Media Architecture Biennale was here in 2012; IDC 2014 will be here next June (paper deadline January 13, demos March 21!); there was an intense two-week workshop here last summer for senior researchers and Ph.D. candidates on participatory IT and there will be more in the future. Furthermore, researchers from Aarhus play ongoing roles in PDC and many other important venues. Of course, among other things, Susanne Bødker (a name which I once thought was simple to pronounce and now consider simple to underestimate) was paper chair for CHI 2013. Martin Brynskov and others held a Smart Cities workshop for Ph.D’s this past summer in Split, Croatia. Kim Halskov and Peter Dalsgaard orchestrated an experiential piece at the Aarhus Festival that ran here the first week in September that involved a deeply delicate and attractive relationship between user movement of pieces, table-top display, and music. Controlling it was as smooth and as unexpected as ice-skating (but less painful). Work in the department is deeply tied to work in the town itself. One class that I heard about in architecture is not only taking on design problems posed by the city, but has taken instruction in co-design to the next level by inviting city administrators and citizenry to participate as enrolled students. Researchers are currently planning an Internet Week Aarhus, which will be one component leading up activities associated with Aarhus’ designation as the European Capital of Culture for 2017. Whew!

OK. I admit it. I’m swept off my feet. I am seeing this through rose-colored glasses. Or maybe I should say green-tinted glasses, because I am seeing a very pleasant word pop out like red bars in a field of green ones: DESIGN.

Aarhus is doing wonderful work in research and inquiry, but that I could have seen from afar. What I could not see is that design is a very important word to the Danes, not just in academia but in everyday life. Hotels advertise the kinds of chairs that they offer (Arne Jacobsen is prominent). Numerous shops have the word design in their name, and others do not need to because they are so well known. There are designs that are not actually new (Louis Poulsen lamps) but that persist because they are so appreciated. And there are designs that are actually novel. There are not one but two design museums in Copenhagen, and even Tivoli Gardens recently opened a Kähler-sponsored Design Restaurant. Tivoli Gardens, named after the park in Paris which is itself named after town in Italy in which the purely delightful 16th C. Villa D’Este is located, is the pleasure garden that inspired Walt Disney. But can you imagine Disneyland or Disneyworld serving high quality food that is prepared to please the eye as well as the mouth? People might linger at EPCOT, but the Terra Disniana is a staging location.

Not everything is perfect. There is graffiti in places that do not strike one as art. There is broken glass caught in the spaces between the cobblestones. There was the embittered drunken mercenary on the train, and the men who just can’t quite get up off the pavement, sitting there, feet outstretched, in the downtown in the early morning. But these are exceptions. What I see, overwhelmingly, is care.

I see care in almost all little yards, with their roses and carefully pruned hedges. I see care in the babies and toddlers bundled into snow suites walking down the street with child-care providers, two in the carriage, one or two walking. I see care in the simple but diverse forms in the shop windows; the way that large housing developments are differentiated by subtle details of form or materials; the choice of materials. When we register at the immigration bureau, the bathroom is a dramatic statement, featuring a long green plexiglass panel, perhaps 12’ high and much longer, hanging about 6-inches in front of the wall. On the opposite wall is a long mirror at waist height, lending to a bright and airy feeling to the oddly elongated room. At the business end of the room, opposite from the toilet, the otherwise plain green panel has a brushed aluminum plate with a button and a light. The button reads “lock/unlock” and the light shows that I did, indeed, lock the door. A carefully espaliered plant sits in the window. Can you imagine the American Immigration and Naturalization Service even allowing visually pleasing attention to detail?

And make no mistake. This is not some high-falutin’ place because I am an American academic and therefore get to board on the red carpet. This is where all foreigners go. Denmark is, for example, 3% Muslim. This does not make it into mecca, but it does reflect considerable immigration and, since Aarhus is the second biggest city, you see plenty of women in head scarves and full-body coverage who are clearly from the Middle East or North Africa. All of them must have visited this lovely building with offices separated by glass walls with rolling glass panel doors.

I see care elsewhere—in the way that my furnished apartment is simply but peacefully appointed with a vase, candlesticks for tea lights, and a throw rug over the back of the couch. I see care in the way that women adorn themselves with one point of color or texture in otherwise simple apparel (even some of the Muslim women).

Perhaps it’s just me. But I do love it. It is directly pleasing in the moment, and I associate care in the particulars with a raft of admirable moral properties. “All things are doubly fair/If patience fashion them/And care—,” as Gautier wrote (Translated by G. Santayana).

And the design point is not just that design is important to the Danes, but that it does not seem to require external justification. The background to the University’s seminal position is a kind of omnipresent design reflex. This reflex is not in ignorance of other important values in the world, such as a robust economy, nor is it necessarily easy, as there is discipline involved in design processes, but it is a way of doing things, a mode—in short: a culture. As far as I can tell, attention to the visual world is paid because of a sui generis value placed on delightful human experience. Perhaps this is my delusion, but, please, let me live with it a bit longer. This is much closer to the way I feel the world ought to operate than the world I usually live in.

And if you want to know more about IT research at Aarhus University, I suggest to visit