Lifetime effigies: 3D printing and you


We all have limited shelf lives. During our own lifetimes, or afterwards, some of us might wish to “publish” many hundreds, thousands, millions, or even billions of lifelike effigies, miniature or full-sized replicas of ourselves. 3D printing now offers a relatively practical, medium-cost way to achieve that objective. What was once the prerogative of wealthy pharaohs, kings/queens, and dictators of Middle-Eastern or Southeast Asian countries, is now available to almost anyone.

Many of the greats of the Internet world (only around, say, since the explosive arrival of the Web in 1994, or maybe a decade or two earlier if you count the technical origins) and many of the greats of the design world (say, for the past 60 years of the post-World War 2 era) have already died. Every one of them will, eventually. Perhaps we can capture them now, or in the near future, to keep around as replicas.

This awareness/knowledge of impending death does not necessarily lead to depression, lethargy, enervating wandering of the mind. This consciousness can focus attention to help us decide about what one can, must, and should do with (as for me) about 350 million seconds left. There is even one wristwatch that offers a death clock to remind one of the countdown. This awareness/knowledge can lead one to jettison many frivolous commitments and objectives (unless one decides to devote oneself to frivolity, of course).

For me, it has led to observations and speculations about what to do about death, or life-after-death, in the age of the Internet. Some comments follow.

Jeremy Bentham (February 15, 1748 – June 6, 1832) was a British philosopher and social reformer. Before he died, as early as 1769, he began planning for the dissection of his body upon death and its preservation as an “auto-icon.” His remains were displayed three days after his death. His skeleton and head were preserved and stored in a wooden cabinet, the skeleton padded with hay and wearing his clothes. The University College London acquired his remains in 1850 and displayed them to the public. A 360-degree rotatable, high-resolution “Virtual Auto-Icon” is available at the UCL Bentham Project's website.

Dr. Gunther von Hagens gained fame in the end of the last century for replacing the water in cells of dead bodies and making plasticized versions of them, which were/are exhibited in the Body Worlds exhibits (see my article about this phenomenon: Marcus, Aaron (2003). “Birth/Death of Information as Art: ‘BodyWorlds.’” Information Design Journal, Vol. 11, No. 2/3, pp. 246, John Benjamins Publishing Company. See also here).

Some years ago, I had speculated that people would take this plastination process, mass-produce it, and lower the cost, enabling any family to have beloved past family members, pets, and perhaps a few close personal friends preserved and on display in one’s home or business. It was only a matter of time.

After all, and as suggested above, life-sized, and larger, effigies of rulers have graced palaces, monuments, cathedrals, and numerous other governmental, religious, and commercial sites. Also, sports figures: I am reminded of a two- or three-story-sized three-dimensional effigy of the internationally famous Chinese basketball star Yao Ming, which graced a building in Beijing or Shanghai when I drove past it in 2002. I speculated that 3D printing might bring about something like the democratization of effigies.

Now, as before, that reality, the evolution in honoring past or present personages, has already been anticipated by several companies. The first I encountered using 3D printing technology was in Berlin in October 2014. I discovered TwinKind 3D, which has a franchised shop in Berlin. They produce miniature 3D-printed replicas of people based on specialized scans that they make. The cost is “reasonable”: 100 Euros (about $125 for a 10-centimeter figure, and 25,000 Euros (about $32,000) for a two-meter (that is, life-sized) version. 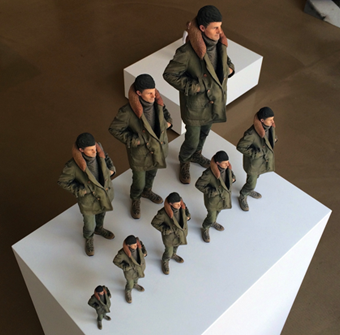 Photos of 3D printed bodies from TwinKind3D store in Berlin.
(Photos by Aaron Marcus, used with permission of TwinKind3D, www.twinkind.com.)

I found a similar company in China while reviewing exhibits recently at SIGGRAPH Asia 2014 in Shenzhen, China: Apostrophe’s in Hong Kong, but with locations, also, in Beijing and Taipei, offers 10cm effigies for 1900 Hong Kong dollars, or about $245. They produce effigies for games, advertising, 3D posters, and other commercial uses. 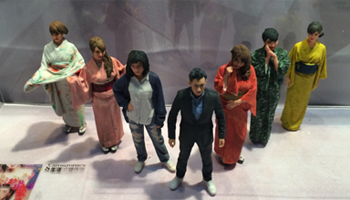 One immediately speculates about the future of such effigies, whether miniature or life-sized.

Imagine the global hubbub caused when Lady Gaga releases her next.... no, not Internet music video, but the latest licensed, authentic, non-reproducible 3D effigy of herself. Would some media stars do this? Of course they would! To better communicate with their “Little Monster” fans and to increase income from purchases of branded items, just as Hello Kitty has added her adorable face to pens and combs.

Speaking of copies, authorized or not, I am reminded of my initial shock in 2002, in Xian, China, I when I encountered an “authentic reproduction” facility located near the archeological site of the 10,000 Chinese warriors that had been unearthed nearby in Central China. Here, the interested tourist could buy official copies, miniature, half-sized, and full-sized. I chose half-sized, and the official government knock-off factory kindly packaged them and shipped them to my home for an additional cost. Clearly, the government had realized the value of official copies.

Who hasn’t had a pin-up of some favorite music, cinema, or television star ornamenting a teenage (or younger) bedroom? Now Lady Gaga might be featured in your home or business, wherever you would like her, provided she made available official, licensed replicas.

I have written earlier about this topic of copies in an earlier publication and lecture in which I cited Alexander Stille’s brilliant essay “The Culture of the Copy and the Disappearance of China’s Past” (in his book, Stille, Alexander (2002), The Future of the Past, Farrar, Straus and Giroux, pp. 40-70). Stille mentions the entirely different attitude that traditional Chinese culture has had to copying. In many works, the original materials of an artifact may have been completely replaced as they decay over centuries, but the work is still revered as the “authentic entity,” just as most of the cells of our body are replaced after a period of time, but we still consider the “person” to be the same entity. In China, artists have been traditionally expected to copy their masters. There is one case of a well-known, successful painter who sold his own work as well as copies of previous masters signed with their signatures. (For further reading on copies and their role in culture, please see Schwarz, Hillel (1996). Culture of the Copy. Cambridge: MIT Press, 568 pp.)

While I am on the subject of Lady Gaga and the quantified self, I have also speculated in our case study of the Health Machine (see for example, Marcus, Aaron (2011). “The Health Machine.” Information Design Journal, 19 (1), pp. 69-89), that Lady Gaga might license the data about what she had for breakfast this morning, thus encouraging her “little monsters” fans to copy her eating behavior and thus to be persuaded to change their own eating, and exercise, behavior.

Now, back to effigies...

One can make one’s own Madame Tousseau exhibit based on laser scans of one’s naked or clothed body. Remember how embarrassed you were as a child when your parents showed others nude photos of you as a baby or toddler? Imagine what is coming up! Together with videos, photos, and recordings, an entire Museum of One’s Self could be possible, for the obsessively self-centered and suitably moneyed. Silicon Valley entrepreneurs, please note.

Gallery of your favorite dead relatives

For those who are obsessively nostalgic, imagine the delight in assembling a flotilla of dead relatives at family gatherings, dinners, and other celebrations. Just like the statues at Hearst Castle in California...only yours. An entire family legacy in miniature could take up just a cabinet...or a room, depending on your size preferences.

Recall that Jeff Koons the noted pop-artist has sold his work showing 3D sculptures of famous people and objects for spectacular prices. On November 12, 2013, his Balloon Dog (Orange) sold at Christie's Post-War and Contemporary Art Evening Sale in New York City for $58.4 million. In 1991, one of his Michael Jackson and Bubbles sculptures, a series of three life-size gold-leaf-plated porcelain statues of the sitting singer cuddling Bubbles, his pet chimpanzee, sold at Sotheby's New York for $5.6 million.

Now, 3D printing brings the possibility of favorite icons to an affordable level, for those who would to savor, save, or swoon. We may all rejoice...yes?

Cemeteries: A new playground for effigies

Let me mention two important experiences I had in cemeteries.

Many years ago, probably in the 1980s, I was in Japan and visited a cemetery. I witnessed families having picnics near their relatives’ graves. I thought that odd and interesting, because in the USA, cemeteries are usually thought of as dull, dreary, somber, and scary places. In Japan, they seemed to be places of joy, where family members communed with the spirits of their dead ancestors.

In 2008, I visited a Jewish cemetery in Odessa. I was shocked to find large-scale life-sized photographic portraits of the deceased sandblasted or acid-etched into the large tombstones. 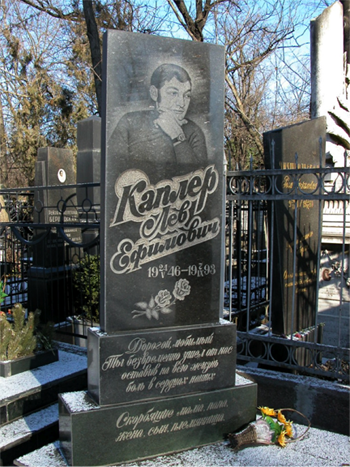 This type of display was quite unlike what Jewish cemeteries usually do, or for that matter, most Christian cemeteries in Europe and North America. Of course, we have had life-like portraits on caskets dating back to the Coptic Christians in Egypt from thousands of years ago, and Egyptian and other ancient civilizations were not hesitant to make life-sized, even more likely giant-sized life-like or stylized replicas of their dead rulers, as mentioned above.

Now comes 3D printing! A new business opportunity for the recorders and archivists. What vast sums of money will be spent to decorate one’s grave with a chosen life-sized 3D replica of oneself, in whatever pose one wishes (subject to local laws on disreputable behavior or attire). Imagine the makeover of cemeteries worldwide, becoming a kind of Disneyland of the Dead.

In sum, 3D printing enables anyone to gain the eternal display capability and economic publishing of one’s image once available only to a few in past centuries and millennia. We have the democratization of death-effigies.

Note, also, that some organizations or institutions already in existence may swoop in quickly to capitalize on producing the first “authentic replicas” or “commemorative replicas,” just as the Franklin Mint in the United States produces authentic commemorative coins of its own minting.

The future of 3D effigies is bristling with possibilities. Of course, we shall have to consider side effects that may be undesirable, but...we’ll leave that for another pondering.