Every once in a while, in the world of high technology, I encounter someone who is doing a perilous, marvelous thing: planting his/her feet on the ground, and, in grounding him/herself, becoming a conduit for far more.

At the Participatory Design Conference in Namibia last month, Cristóbal Martínez did this both figuratively and literally. Cristóbal is a graduate student of James Paul Gee and Bryan Brayboy’s, in Rhetoric, at Arizona State. He is also a mestizo from el pueblo de Alcalde, located just north of Santa Fe, New Mexico. Martínez is also part of a collective, Radio Healer, that explores, through rhetoric and performance, indigenous community engagement. And some of that engagement involves appropriation of pervasive media.

At PDC, Martínez committed an act of digital healing for—or perhaps with—us. The performance that I saw integrated traditional and novel elements. He first spoke, then donned a mask to dance and made music with shell ankle-rattles, a flute, his voice, and three Wi-mote-enabled instruments. One, a bottle that he tilts and turns, has drone-like properties, almost like a Theramin, that establish a kind of keening baseline for the performance. The other two—handheld revolving platforms with Wi-motes’s affixed—are musically more complex. They provided rhythmic form through the period of revolution of the platforms as he held them, and melodic content through the variation in tonality as the Wi-platforms revolved. 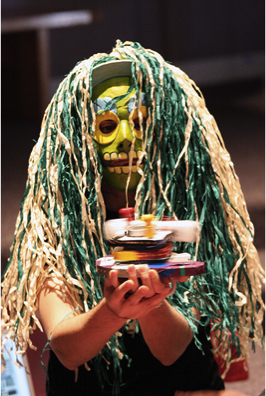 In some important sense, this was not much different from the buffalo dances my family and I have witnessed and enjoyed on New Year’s Day near to Martínez’ home in New Mexico. I experienced it with similar emotion in Namibia as in New Mexico, and indeed my direct experience in Namibia was overlaid with a memory. We had taken our three-year-old, Galen, to the Buffalo Dances, and he stood there on the arid yellow winter ground, entirely absorbed, for several hours, apparently indifferent to the considerable cold. He was also uninterested in offers of snacks, lunch, or naps. (Our baby was also completely absorbed from the comfort of his much warmer stroller, so that made an entirely absorbed family.)

Eventually, the huge Abuelo (grandfather) in his cowboy hat came over to Galen. Galen, also in a cowboy hat, and with his great serious, steady dark eyes, and his soft trusting little baby cheeks, looked up at the Abuelo. The Abuelo silently held out his great huge man hand and folded Galen’s little one into a serious man’s handshake. After which he gave him a very tiny, very precious candy cane. There it was, in two silent, economical gestures: acknowledgement of the elements of the man my son would become (and now is), and the child that he was. We had come to witness the dances, but we were, in this way, also seen.

In some sense, Martínez’ performance was like that for me. It was replete with directly experienced meaning—meaning perceptible to my three-year-old and even the 8-month-old baby. I was a witness; I found my own meaning in it despite my non-native status, and I was to some extent and in some generous way invited to partake.

But there are some differences worth thinking about. Martínez was performing in isolation from his collective; he was performing for us, a small and sympathetic but definitely global audience; and then—the trickiest bit—he was adopting and adapting Wi-motes.

I am not in much position to talk about what Radio Healer means in its own setting, except that we cannot think about what Martínez was showing us without thinking about the framing he gives it. His purpose is to open up and enliven a self-determining community through the assertion of what he calls “indigenous technological sovereignty.” He wants his people to engage in critical discourse around the appropriation of technology. He wants them to re-imagine it for their own purposes. Possibly “he wants” is too egocentric a phrase. He probably sees himself as a conduit of a larger collective wanting. This quest is given purpose by their own pursuit of their own cultural logic and lives, but it is also given poignancy by pressures that particularly impinge on Indian sovereignty. Not only have Indians been decimated, abused, underserved and neglected in the past, but they also are currently colonized in many ways, not the least of which is a considerable pressure to be a kind of living fossil—to live as stereotypes of themselves, unable to change, and unable to create living community.

Martínez is not the only person to protest this pressure. Glenn Alteen and Archer Pechawis expressed it at last spring’s DIS conference in Vancouver in explaining the operation of grunt gallery (especially Beat Nation). And, while in Vancouver, I was lucky enough to be able to see Claiming Space, the hip-hop Indian art show at the Museum of Anthropology, created by teenage urban First Nation people. The question that was posed around that curated exhibit was, “Why should it be noteworthy that Indians engage with hip-hop?”

And the good question that follows on this (“Why should it be noteworthy that Indians use Wi-motes in their ritual?”) brings us back to the meaning of Martínez’ performance for us at PDC. Because Indians are also Americans or Canadians or citizens of the world, and, even if they were space aliens, Martínez’s healing tacitly suggests that the performance has relevance beyond its indigenous origin.

To my mind, the relevance stems first from the fact that we must all—Indian, not-Indian, American, African—decide how to live, given the palpable options in front of us and then, secondarily, among the pressure of computation. Computing is a structural enterprise, but we are not structural creatures. How do any of us create lives, our own rich lives, in the constant presence of the reductionist properties of the computer? In this sense, computation is a colonization that we all face.

Martínez’ performance underscores the ways in which it is terribly, desperately hard to wrest even a device as simple and innocuous-seeming as a Wi-mote from its place in fulfilling and fueling consumption in a consumer society towards location as an expressive element in a spiritual practice. He cannot even do this simple thing, using it in a performance, without it being noteworthy, even definitional! How much more difficult it is to resist the self-definition we see in the systems embedded into the everyday activities of our lives? Martínez, arguably, provides us with a model for culturally responsive critical engagement with emerging pervasive technologies in the early 21st century. His performance raises appropriation to a design principle: Use that which is noteworthy, but use it for your own purposes. Make sure that they are your purposes. Or as Studs Terkel used to say, “Take it easy, but take it.”

Deborah, thanks so much for this lucid reflection on a complicated event!  It makes its significance clearer even for those of us who were present.