Most people today have not yet had the opportunity to interact directly with a robot in their everyday lives, except maybe with children’s toys or those charming robotic vacuum cleaners. While there are ongoing experiments with robots in healthcare, many more are employed in high-tech efficient environments such as factories. But robots have also often played a large part in our cultural and historical imagination. This is celebrated in current exhibitions such as “Robot” at the Science Museum in London, exploring 500 years of humanoids robots, from pop culture to products, and “Hello, Robot. Design between Human and Machine” at the Vitra Design Museum in Germany. Apart from thematic exhibitions and despite robots pointing toward future automation, robots are starting to be used in heritage contexts to provide services, from remote exploration of museum sites to robot-based guided tours. But what happens when robots move from being an attraction to being an agent that shares the same physical space with people?

Beyond the laboratory, everyday contexts require robots to be incredibly stable and reliable over time. This is particularly important for historical sites; their use should not, under any circumstances, damage the heritage or endanger the safety of staff or visitors, or interfere with preservation or visitor enjoyment and appreciation. Challenges emerging from the use of robots in heritage contexts however, do not only relate to functional aspects, but also perceptual ones.

The role of aesthetics

Among many factors that can determine robotic acceptability such as purpose or safety, physical appearance can instantly affect how a robot is interpreted by all kinds of users that might interact with it. It is therefore of primary importance for the robot to be designed in a way that can quickly and easily communicate its skills and function, since it determines if people will understand its role and respond appropriately.

However, effective communication of a function doesn’t ensure success. For instance, in the case of service environments, robots share physical contexts with people through activities and interactions, social relationships, and artifacts. Thus, through all these aspects, a robot automatically establishes implicit relationships to which people refer for their interpretations and judgments. Cleaning robots, for instance, introduce novel technologies for cleaning activities that people are already doing with vacuum cleaners. Beyond being employed for a clear function, their appearance and aesthetics reminds them of existing products. This approach attempts to avoid ambiguities and concerns. The employment of humanoid robots for activities that are usually entrusted to people, such as museum guides, customer care, or home assistance, however, will automatically bring forth a comparison between robot and human abilities. As a consequence, this comparison can surface uncanny feelings and concerns. Furthermore, even when people are not replaced, robots are evaluated on their ability to fit into people’s sociocultural context. The design of a robot, then, should take into account the particularities of the specific context in which a robot has to be located.

Given these considerations, a good practice for the design of a robot is a formal synthesis that results from a morphology with an explicit function and the aesthetics familiar to the context.

In 2015, I was part of a team at Politecnico di Torino, where we designed Virgil, a telepresence robot, in response to these considerations on morphology and familiar aesthetics. The design, consisting of a robot that allows remote exploration of inaccessible areas, was employed at the Racconigi Castle, in Italy. It resulted from a broad reflection on the dual nature of cultural heritage, as a specific context, to focus not only on preservation but also on enjoyment and accessibility for visitors. The castle, one of the royal residencies of the Savoy family, is a context rich in artworks, artifacts from daily life, and architecture that preserves a history of almost a thousand years. As a design team from Politecnico di Torino, guided by Prof. Claudio Germak, we designed this application within the context of a project promoted by Telecom Italia Mobile (TIM, the main mobile telecoms provider in Italy) in collaboration with the Terre dei Savoia association.

Our aim was to provide visitors remote access to inaccessible areas of the heritage, such as the nurses rooms, the tiepidarium (thermal bath), and other areas currently excluded from the exhibit for safety, restoration, or cataloging issues. To do so, a robot was managed by a museum guide via a web application. Apart from the willingness to provide an extension and enhancement of the heritage visit, we devoted great attention to the possible perceptual drawbacks. We focused on how to communicate the particular role and function of the robot and how to define an aesthetics appropriate for that specific context. Regarding the first point, we chose to keep the main elements, such as wheels, laser scanner and camera, visible so that the function of the robot was explicit. Regarding the familiar aesthetics, we analyzed the heritage context from the physical and cultural point of view. This led to a robot design that, both in form and decoration, recalls existing elements of the heritage. 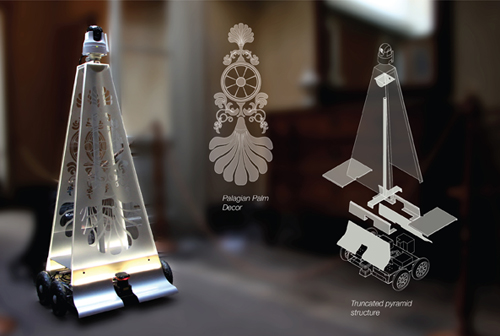 Figure 1. The robot Virgil inside an area of the Racconigi Castle. The illustrations
show the two main characteristics of the robot's appearance: the shape and decoration.

The cover, made of PMMA (poly-methyl-methacrylate), has the form of a truncated pyramid. This morphology was chosen to recall similar shapes largely diffused in Savoy tradition, used in obelisks, bollards, and other architectural elements or furniture. The choice of a transparent material was determined by the need to ensure maximum lightness both from the structural and visual point of view.

Furthermore, the body of the robot was decorated with the aim to customize it in relation to the context. It consists of décor, which represents the Palagiana palm, an existing decoration that can be found in many artifacts of the castle. The decoration, then, was both a way to obtain aesthetic coherence and to make a tribute to both the architect and to the history of a place that was characterized by continuous evolution over centuries.

This design approach not only represented a way to increase the acceptability of providing visitors remote access to inaccessible areas of the heritage, but also revealed greater design opportunities for considering the aesthetics of robotics that went beyond their functionality and acceptability.

Maria Luce Lupetti is a Ph.D. candidate in Design for Service Robotics, at Politecnico di Torino, Italy. Her research, focuses on human-robot interaction and play and is supported by Telecom Italia Mobile (TIM). She was Publicity Chair for HRI Pioneers Workshop 2017 and visiting scholar at X-Studio, Academy of Art and Design, of Tsinghua University, China.
View All Maria Luce Lupetti 's Posts