What kinds of users are there? Identity and identity descriptions


User-centered design of user-friendly products and services is based on the assumption that designers are aware of who the users are. Their understanding is embodied in typical user identities or personas. There is much discussion about whether these are typical, stereotypical, and archetypical, and how one can account for, or not lose track of, important outliers that might have a valuable influence under unforseen conditions of use.

Many years ago we published a diagram of user-experience spaces: 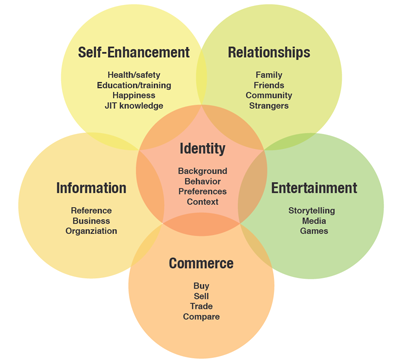 Note that Identity is central to the other five spaces in which new products/services can emerge, in the sense that each of the others requires an awareness of the user/customer. There are many interrelationships among all of these spaces. The other five are equally as important as this central one, and some would argue that these other five determine or influence what constitutes identity; the diagram merely means to indicate that there can be products/services that primarily focus on the gathering/availability/sharing/use of identity data.

Many have analyzed identity and claimed positions, including more contemporary thinkers like Foucault, Hall, Butler, and Baumann, along with older sources such as Erikson. One survey of thinking along these lines is an essay by David Buckingham, “Introducing Identity” [1].

The challenge for product/service developers/designers is determining the identity of the targeted or future users. One can also ask whether users have a single identity or multiple identities, and whether or not their identity/identities cause, or are affected by, the preferred social milieu. There are important questions to ask: Who determines that identity? Marketers? The users themselves? Design teams? Governmental, educational, or professional organizations? Other influential groups? Today in commerce, in technology, as well as in politics and in governance, there is much consternation and hand-wringing about identity-politics, about identifying the identity of groups of people, about deciding which are “targeted” (literally and metaphorically), and what actions to take once the identity or identities of certain people are determined.

Once one starts down the road of identifying identities, one enters a labyrinth of complex social, cultural, historical, and ethical issues. In addition, for any one person or group, it is surprising to discover how complex and manifold the identity charactersistics are. Again, who decides which are appropriate, legal, ethical, useful, etc.? Commentaries on contemporary selfhood, otherness, and other identity issues and definitions might question a single identity and favor contemporary individuals in “advanced” societies as having multiple, composite identities and exhibiting multiple cultural competencies. I mean to avoid a simple position about an individual or group in favor of a more complex position that can account for contemporary social phenomena.

I started to think about this a year ago when I learned of a group trying to contact and incorporate various groups of people into the mainstream of Judaism. I shall use this topic of Judaism as an example for several reasons: because I am simply talking about myself and am not trying to describe, judge, or evaluate other kinds of people, and because Judaism is a particularly complex amalgam of religion, people, nation, culture, and other demographic categories.

I ask myself: What kind of Jews have I encountered? What kind of a Jew am I? Established by philosophy or values? Or, by actions? Who decides what kind of Jews there are and who belongs to each of these groups? A book I’ve encountered has prompted me to consider these questions more deeply than ever before.

Every Tongue: The Racial and Ethnic Diversity of the Jewish People, by Diane Tobin, Gary A. Tobin, and Scott Rubin [2], analyzes diversity in ethnic, racial, religious, and other dimensions of the Jewish people, especially in the USA. The book is very stimulating and thoughtful, fact-filled and polemical, challenging and endearing. The data presented in the first chapter, for example on pp. 20ff, and especially the terminology used throughout the book, prompted me to think about how one would categorize or describe one’s “Jewish identity.” I started to make a list on the pages of the book, but then ran out of space. I realized I had never thought to try to look at and think about What kind of Jews are there? (A more recent book has appeared by Aaron Tapper: Judaisms: A Twenty-First-Century Introduction to Jews and Jewish Identities [3].)

Consider that task for any other kind of identity, your own, or that of someone else in another group. Especially a “target group.”

It is fascinating, as I learn about the weekly Torah portion or parshah that I was reading in the Torah during the past few weeks in my synagogue’s (Congregation Beth Israel, Berkeley) study session or Beit Midrash, headed by Maharat Victoria Sutton, that we are witnessing/discussing a small group of people (originally 70 coming to Egypt), who are now leaving Egypt after centuries there, part of the time in slavery, being instructed, forged, created, commanded, enlightened into a Religion/People/Nation of Israel, with all the complexities of identity, social structures, religious structures, and more, while they are yet wandering in the desert. How timely. How timeless. What makes for one’s identity? What kind of a “card-carrying Jew” am I? What attributes are listed on that card? “What’s in my wallet?” to paraphrase a popular commercial phrase on television these days.

I wonder if, out there on the Internet, there is a Glossary of All Glossaries, or Taxonomy of all Taxonomies, of Jewish Identity. Probably. I have encountered a few partial solutions.

Consider this activity for any identity, for any group, for any target market... Identity is far more complex than one usually considers. Then begin to ask yourself how you would design with that knowledge, and design ethically. How can a mind-map of identity/identities be a tool for better design, if only as a reality check, warning, or immunization against inadvertent limitation or bias.

If you have suggestions for additional categories, please send them to aaron.marcus@bamanda.com. Thanks in advance.

I am indebted to Gilbert Cockton for the Buckingham reference and for his astute critique of an earlier version of this text, which led to many improvements.

2. Tobin, Diane, Gary A. Tobin, and Scott Rubin (2005). Every Tongue: The Racial and Ethnic Diversity of the Jewish People. San Francisco: Institute for Jewish Community Research, 2005.