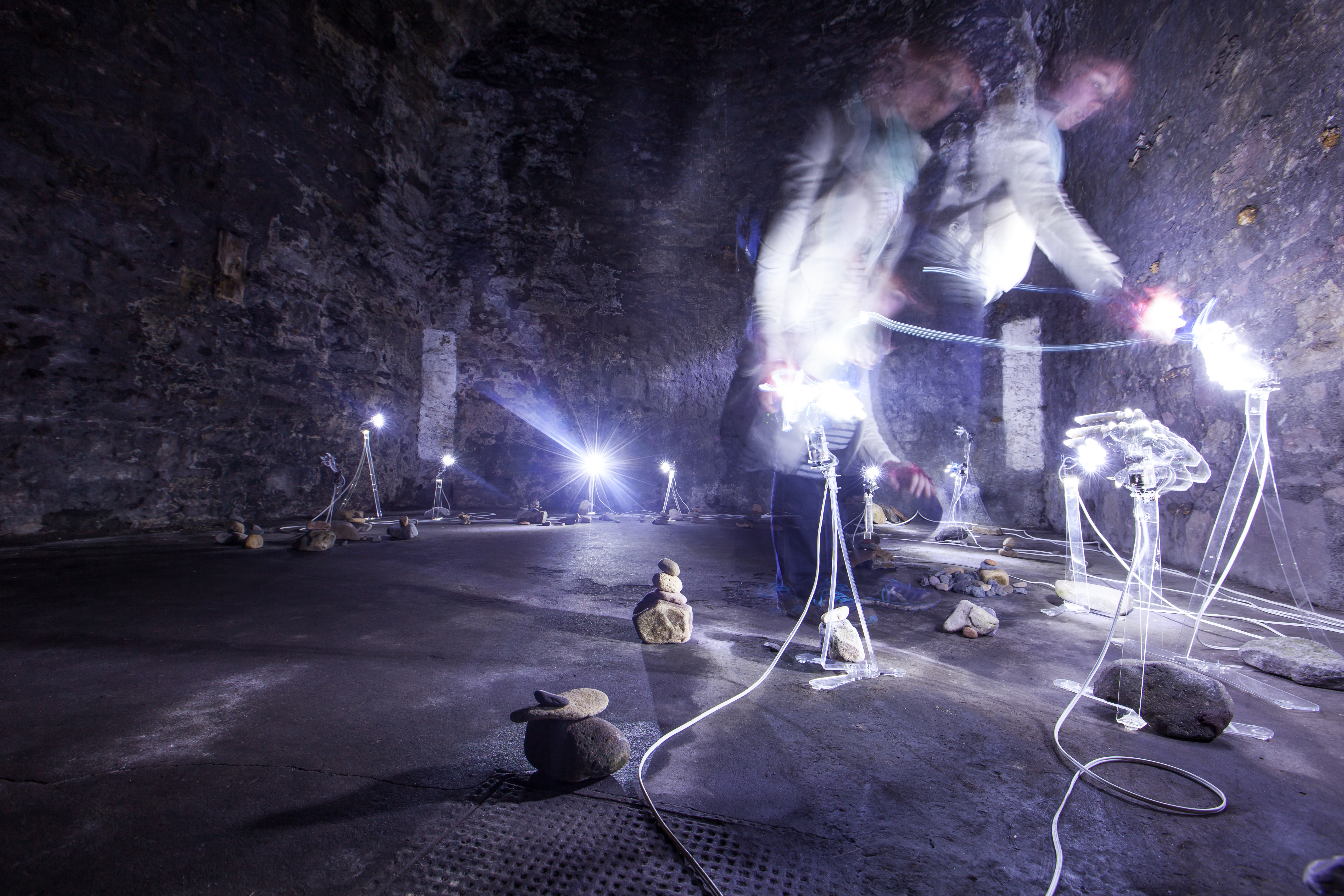 Describe what you made. We made a photo-kinetic installation composed of a variable number Lichtsuchende with which people can interact using flashlights. The Lichtsuchende are small robotic creatures that form a cybernetic society of light-seeking flowers. They are designed to track light and move and shine in response, communicating with people and other robot flowers. Similar to a sunflower, a Lichtsuchende will face and follow a light source. The robot flowers are programmed to "drink" and shine light, producing a fluid improvised choreography of light and communication between cybernetic and human creatures. When a Lichtsuchende has drunk enough light, from either a flashlight or the light of their fellow robots, the flowers become excited, stretching upright and shining their light in patterns. Then, exhausted from all these activities, they go to sleep. This cycle of seeking, finding, drinking, celebrating photonic encounters, and recovering from exhaustion is the sociality of the robot flowers.

Briefly describe the process of making them. The process of making the Lichtsuchende was iterative and explorative. We started by experimenting with simple setups of Arduinos and stripboard, LEDs, light sensors, and servos to get a feeling for how they would become animated. Then we conceptualized an installation, prototyping a couple of light-seeking robots and exploring how they interacted, and began to think about how people might experience and engage with them. Next, we prototyped the industrial design, creating PCBs with integrated microprocessors and sensors to streamline construction and develop an aesthetic approach. Simultaneously we designed and cut some acrylic mounts for the servos and PCBs. As we were putting the parts together we identified design flaws, which led to the redesign of the second batch of robot flowers with improved capabilities—simpler and more robust.

The key for us was to allow the head of the robot flower to do the computation, to be autonomous. Thus, we opted for a custom-made board that incorporated its own microprocessor and all the electronic components needed to give each robot flower the ability to perform as an individual creature. Keeping the robotic parts and electronics in sight was a choice we made at the beginning, because we did not want to hide these things from people.

Did anything go wrong? Of course, things did not always go according to plan, and after having prototyped, designed, and redesigned the boards and acrylic pieces we found some elements that could be improved or were done the wrong way. We found a big difference between making one-off pieces, where hacks, workarounds, and rewiring were okay, and making multiple pieces, where everything needs to "just work" because changing the design means changing it on 30 robots.

One of the main problems we had during the development process was the fragility of the robot heads, especially the thin petals with the light sensors on them, and the unreliability of some of the components. The first servo motors we used tended to burn out rather fast.

One of the ways in which we were able to distinguish robot flowers from each other was through their faults: the jerkiness of their movements (faulty servos), their inability to turn on one axis (broken petal or light sensor), the lack of power feeding into the main board (broken connection between power and main board).

What was the biggest surprise in making them? When we started, we had not envisioned how time-consuming it would be to build one single robot flower. Even worse was adjusting to dealing with multiple robots, where tweaking the code suddenly meant spending two hours reprogramming 40 separate units.

How would you improve on them if you were to make them again? As the process went on, we learned more about industrial design and prototyping. If we were to start again, we could get more of the work done by our fabrication house, which would make life much easier. We would definitely start another project thinking about which bits could be outsourced to professional fabricators.

I-Eng: A Toy for Second-Language Learning