There are two major decisions most design students have to make during their four years of undergraduate design school.

The first Big Decision, often made after completing a freshman "foundations" year, is jokingly referred to as "Poster or Toaster?" This is the decision to choose a specialization, traditionally either graphic design or industrial design. While the choices have broadened recently to include interaction design, fashion, furniture, packaging, and gaming, the decision is still the same: What area of focus should I pick? Specialization, in this case, is in a particular medium of design work, not in a subject matter.

The second Big Decision, usually considered midway through senior year, is the job question: Should I go corporate or consultancy? Choosing corporate will typically mean working at a Fortune 500 company like Procter & Gamble or Nike as an in-house designer. Selecting the consultancy path means working at an agency or vendor like IDEO, frog, or Continuum; these consultancies typically work with Fortune 500 companies. Increasingly, advertising agencies are competing for the same talent pool, so designers find themselves working on interactive advertising campaigns at R/GA or Crispin Porter, serving the same corporate clients.

Both of the Big Decisions described here are based on a model of design that is no longer relevant, so these are the wrong questions for students to be asking themselves and for academia to be supporting. The discipline of design is too important to be limited to the corporate sector, and the specialization choices offered by most design schools are insufficient to support the new areas of specialty design students should be selecting from.

When design students select their design specialization, they have typically just completed a year of foundations studies, a series of classes that emphasize and focus on broad, generalized craft skills through classes like 2-D Design, 3-D Design, Drawing, and Color. In these classes, students learn the most discrete hand skills of design through extremely reductive exercises. For example, students may learn to appreciate form through additive building of an abstract shape in clay, and then through subtractive carving of marble or stone. They will take classes in figure drawing and will frequently accompany these hand skills with courses in photography and other perception-building skills. As they complete their freshman foundations courses, they find themselves forced to declare a more specialized major. There are very few academic programs in the U.S. that offer a broad "design" degree; instead, students select a focus. At art and design schools they may attend a majors fair where the professors attempt to "sell" the students on a given specialization. I've seen freshman students select design specializations because it was rumored they would encounter less homework, because they were told they would make a large salary, because their friends were doing it, and for all sorts of other fairly arbitrary reasons. 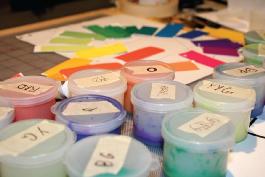 That specialization selection then determines the beginning of what seems, to a naive 18-year-old, to be "the rest of your life," as schools increasingly emphasize job placement and the need to be employable. This focus on employment seems to come directly from the need to offer metrics and statistics to parents, who in turn are concerned about the six-figure investment they are making (often entirely through one or more loans). The pressure for placement in a career that has roots in arts and crafts can seem strange, and in my various teaching roles I've had dozens of conversations with skeptical parents who are chagrined that their child is going deeply into debt in order to make pretty things.

But the promise of a safe nine-to-five job may be a thing of the pastnot just for designers, but for everyone. Between advances in telecommunications tools, changes in lifestyle, and the increasing distrust among the young of the idealistic views of the old, we may be training the first generation that can choose to extract themselves from the rat race of "jobs." Doug Rushkoff argues that "[w]e're living in an economy where productivity is no longer the goal, employment is. That's because, on a very fundamental level, we have pretty much everything we need... We no longer need to make stuff in order to make money. We can instead exchange information-based products" [1].

Rushkoff is describing a form of personal self-sufficiency in which everyone is a freelancer, everyone is an entrepreneur, and everyone is able to engage in productivity when they want to and on their own terms. If this is to become true in contexts of design, students graduating with a four-year degree need to leverage a dramatically different, broader, and less specialized skill set. A focus on basic accounting may trump digital pre-press; understanding operations and logistics may be more important than color theory; and the ability to task-switch may be more critical than understanding kerning. If the fundamental decision to specialize does not go away entirely, the specialization choices will need to shift dramatically, to include skills in services, systems, facilitation, entrepreneurship, and policy.

As design students approach graduation, it occurs to them that they need to get a job, and so they create a portfolio of their work and begin to shop it around to various companies. A design portfolio typically places emphasis on the various things students have made during their four years of college; students who studied Web design may include screenshots of the various sites they have designed. When I worked at frog design, I used to receive dozens of unsolicited portfolios via email in the months of March, April, and May. In portfolio classes, students learn to take often ridiculous measures to stand out from the crowd. Aspiring designer Alec Brownstein created a customized website, pitching himself to various creative directorsand then purchased Google AdWords for each creative director by name, so they would discover his page when they Googled themselves [2]. Colin Kersley submitted an application in game-show format in order to secure a Web-design apprenticeship [3]. With thousands of design students in the U.S. and estimates of close to a million design students in China [4], competition for the few available spaces is fierce, and so it makes some sense to try to differentiate your personal brand to secure a job.

But the aggressive push for students to secure jobs at corporations and consultanciesthe push that's reified by well-intentioned professors who place such dramatic emphasis on "the book"is limiting and artificial, and serves to drive an endless loop of design in the context of business. Design is broad: It can be applied in the context of a corporation or a consultancy, but also in public policy, economics, health and wellness, education, and anywhere else that humans have introduced the artificial into their daily lives. What's more, these alternative areas frequently coincide with large-scale social problemsproblems likely more worth solving than, say, creating a new style of shoe or a new nightclub-finding app. Most compelling of all might be the career trajectory toward social entrepreneurship, where design-led innovation is positioned within a startup culture to drive social change. Designers are in the business of envisioning an idealized future state and achieving that state, and so they are at least broadly aligned with the phenomenon of social change. Entrepreneurism is an emerging vehicle in which to embed design-led social innovations, but design students generally don't consider this a feasible post-graduation opportunity. As educators, we need to encourage our graduates to pursue paths that may ignore or reject the traditional containers of the corporation and the consultancy.

There are challenges to changing the way we teach designers and the way we envision and gauge success for our design-education programs. A small amount of these challenges are logistical (How do we change an existing curriculum? What should the new sequencing look like?), but the majority are cultural, rooted in a fear of change and steeped in a romantic view of the past. When I discuss changing design education with students, they are extremely enthusiastic because they recognize the curriculum they are learning isn't relevant to the world they live in. But when I discuss the same changes with teachersmany of whom have been tenured for years, teaching the same tired activitiesthey react with skepticism, or in some cases, anger. The paradigms described earlier are intertwined with personal memories of some of our design heroes, and to change them is to threaten their legacy.

But evolution of design is critical if we are to see the discipline evolve from an applied art and craft to an intellectual pursuit. As science can be either applied or "pure," so too can design; to date, we have broadly considered it only from the perspective of how it can be applied in big business. Our educational structures need to change to support its application in other contexts, as well as the larger pursuit of designerly knowledge independent from a given application. These changes aren't impossible, and are already happening in some notable institutions. It's time for the vast majority of programs to catch up. Traditional design education was appropriate in traditional times. Our world is very, very different now, and it's a disservice to both our students and our culture to keep beating the same drum.

3. Mark Boulton Design. Colin's application (and why we hired him to be our apprentice); http://mark-boultondesign.com/blog/colins-application-and-why-we-hired-him-to-be-our-apprentice

Jon Kolko is executive director of design strategy at Thinktiv, and founder/director of Austin Center for Design