A matter of semantics…


In 2005, I wrote a blog post entitled, “Is ‘user’ the best word?” followed a year later by “Words (and definitions) matter; however…” The debate about the words we use in our field and their meaning has continued since that time, with many of the old arguments being resurrected. For example, regarding the beleaguered term user:

The preferred alternatives, as a decade ago, are usually person and people or human(s). Baumer et al. argued for consideration of “potentially more descriptive terms such as fan, player, client, audience, patient, customer, employee, hacker, prosumer, conscript, administrator, and so on.” But even such alternatives might have shortcomings. For example, regarding the word customer (also preferred by Dorsey): 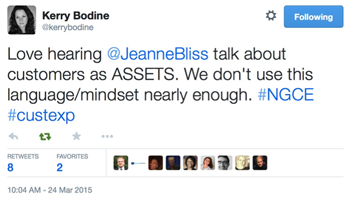 I still can’t imagine the term user going away anytime soon. Indeed, some have defended it, as reflected in the following tweets: 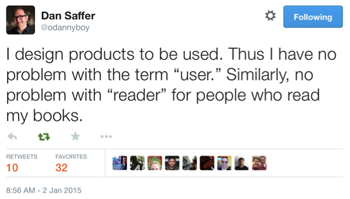 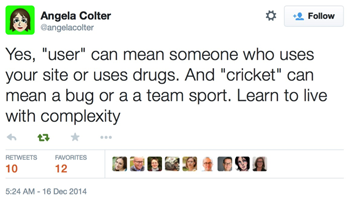 Nevertheless, there has been an increase in the volume of objections to the term, reflecting, I think, a recognition of the need to think bigger—to consider and design experiences beyond the digital in order to design the best possible digital experience.

I address such issues beginning on the first day of my teaching of General Assembly’s UX Design Immersive course. Students need to know that the terms we use in our field matter and, though not spoken of much above, are sometimes defined differently by different people. This has included two of my instructor colleagues, one of whom called all paper prototype testing “Wizard of Oz” testing and the other who called all paper prototype testing “walkthroughs.” Say what?!? In my view, neither one of them are correct.

Such debates seem destined to never end, which might possibly be a good thing. As Jared Spool recently tweeted: 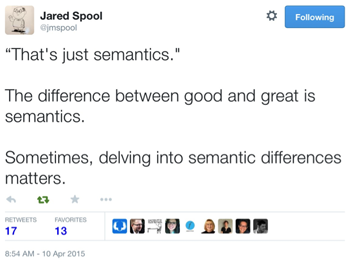