ACM SIGCHI Auto-UI is a growing community, but one in which some continents were less involved than expected and hoped for. For the 2019 conference in Utrecht, the Netherlands, we made various targeted attempts to grow and diversify our international community, with support from the ACM SIGCHI Development Fund. Our efforts resulted in a growth in the number of Asian participants, which made up almost 20 percent of the attendees. In this blog, we briefly reflect on our initiatives and on a panel discussion focusing on research topics that matter more globally to the Auto-UI field.

How we reached out

Based on discussions with members from underrepresented groups, we:

At the conference, a panel of established members from academia and industry discussed “global perspectives.” The panel had combined professional experience on five continents:

Next we briefly summarize the discussion topics.

What is a car?

There are differences in what is considered as a car and what a car means for people between countries and cultures. For example, in Namibia, people need to drive long distances between towns. As many people do not own cars and bus travel is not always affordable or convenient, a tradition of shared mini-bus taxis and car sharing has emerged, with technology used to arrange it. People have re-appropriated Facebook and WhatsApp to coordinate seats in cars (and also delivering things for people); this sharing ties into local customs and African philosophies of sharing.

By contrast, in Korea, the culture is strongly focused on people owning their own car. Ignacio Alvarez shared his industry experience from China and the U.S. Although in both cultures the car is often a means to an end, it also represents a form of freedom and individuality. More and more, it is also becoming a status symbol. In China, for example, a car might also just be parked on the sidewalk to demonstrate the wealth of its owner.

How is culture guiding automotive interactions?

Culture is not static, but alive. Cultural norms and expectations can also change within a person’s lifetime. This in turn can impact automotive interactions. For example, when one becomes a parent, one might have other views on what features of a car are important (e.g., safety instead of speed).

Sometimes, expectations are wrong. For example, in Korea, many interfaces are in English, not Korean. Although this is perceived to look cool among locals, it can hinder understandability and thereby hinder user experience and safety.

By contrast, African cultures, such as in Namibia, often promote collectivism, which contrasts with Korea’s stronger focus on the individual. In Korea, services for sharing cars are not that popular, whereas in Namibia they are essential. At the same time, despite the focus on the individual, within Korea there are also popular services in which one can order a driver to drive one’s car when one cannot drive it themselves. Yet cars are not always designed for use by someone else than the owner.

What can be learned from the Global South?

We gained several insights from the Global South. In particular, we learned about African cultures of repair (to make things last) and practically hacking solutions. We also saw a focus on designing for human values, with a strong social ethic to not exclude others. Many cars in Namibia and Africa are bought secondhand from Asia. All cars are a little different, and people who specialize in repairs of specific types or brands of cars often live far apart. However, they benefit from strong online communities that share information on fixing electronics. This sharing focus relates to the CSCW community’s focus on shared work, while the hacking movement aligns with the maker movement within CHI.

The resilient repair communities in the Global South might also inspire opportunities in an age where automated systems are being developed. Specifically, the resilience of the phone-repair culture in India, China, and Namibia shows that people with initially little domain knowledge can quickly learn from each other. Rather than specializing in one skill, through a network of collaborators, people can learn from each other and exchange knowledge and experiences.

Another consideration is that the design of a car is typically catered to its “first life” in the original country of purchase. However, car reuse in Africa is not considered sufficiently, even though such extended use of technology might be beneficial in times of climate change. The pictures below of a Japanese car in Namibia illustrate two examples: 1) Controls are partially in English and partially in Japanese, and 2) the satellite navigation system only has maps from Japan, and thinks the car is driving near the ocean in Japan instead of on a Namibian road. Both aspects harm the driver’s safety and comfort. 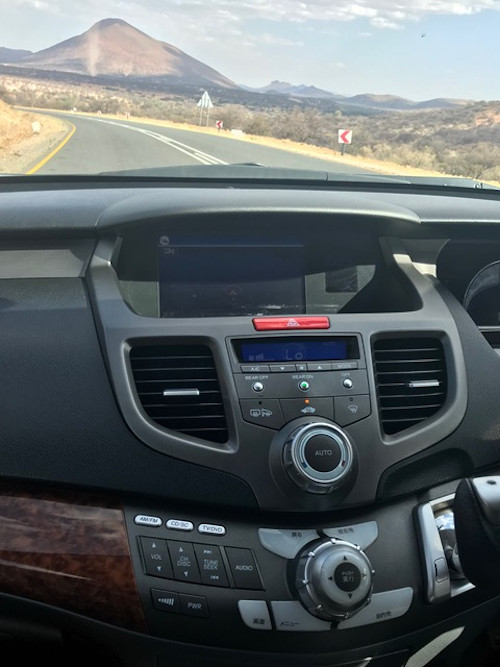 Example of a car that seems to have been designed for its first life only. This car was originally released on the Japanese market but now drives in Namibia. The controls of the car are partially in symbols, partially in English, and partially in Japanese, thereby creating confusion for the driver in Namibia who cannot read Japanese. 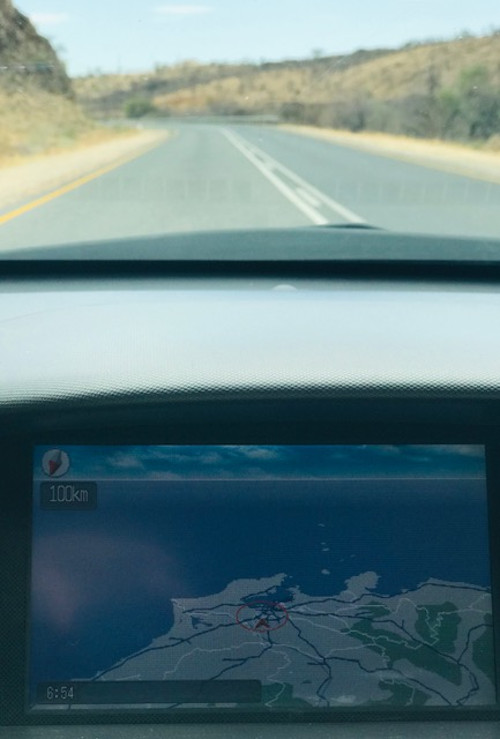 Another example of a car that seems to have been designed for the first life only. This car was originally released on the Japanese market but now drives in Namibia. The satellite navigation system only has maps of Japan, and not of Namibia. Therefore, the in-car satellite navigation system thinks that the car is driving near the ocean in an area in Japan, instead of on a road in Namibia.

Reuse also comes with downsides, as current design does not consider this context sufficiently. In particular, some of the material used in cars and other electronic devices is toxic. In many African countries, there is not sufficient protection for the makers to handle these substances—and some of these makers are underage children.

What are the hot topics?

Within Korea, there is a culture of early adoption of new technology. Combined with the many smart infrastructures and high population density, it is an interesting country in which to test new interaction styles and advanced automated vehicle forms. This is in line with trends within the Auto-UI community, in which there is a focus on automated driving from many angles, including the human user, other traffic participants, and the larger ecology and infrastructure.

More globally, a hot topic is automated driving safety. Yet, despite this growing interest, there remains a fundamental challenge: Safety is understood in different manners in different regions of the world and in different cultures. Some countries are more risk tolerant than others and for industry to satisfy both the utilitarian aspect of vehicles as well as a global notion of safety is sometimes challenging.

Our outreach efforts are only a first step. We welcome suggestions on how to further improve the experience for conference attendees at Auto-UI 2020 (U.S.) and Auto-UI 2021 (South Korea). Suggestions can be emailed to the authors and to the Auto-UI steering committee: sc@auto-ui.org.

Christian P. Janssen is an assistant professor of experimental psychology at Utrecht University. He received his Ph.D. in human-computer interaction from UCL (2012). His research is dedicated to understanding human attention, human-automation interaction, and adaptive behavior. He was one of the general chairs of the ACM SIGCHI’s Auto-UI 2019 conference. c.p.janssen@uu.nl
View All Christian Janssen's Posts

Ronald Schroeter is a Senior Research Fellow at CARRS-Q, Queensland University of Technology, where he obtained his Ph.D. in 2012. He embraces multidisciplinary research across HCI/HMI, design, psychology, and road safety. He has served in various chairing roles of the Auto-UI conference since 2013, including Diversity and Inclusion Chair in 2019. r.schroeter@qut.edu.au
View All Ronald Schroeter's Posts

Nic Bidwell is an adjunct professor in the Faculty of ICT at International University of Management, Namibia. Her research focuses on interaction design for rural communities, mostly in Africa and/or with indigenous people. She was an invited panelist at the Auto-UI 2019 conference. nic.bidwell@gmail.com
View All Nic Bidwell's Posts

Yong Gu Ji is a professor and head in the Department of Industrial Engineering at Yonsei University. He is the director of the Human Factors and Interaction Design Lab. He received his Ph.D. in human-computer interaction from Purdue University (2001). His research is directed at understanding user experience and complexity in human-vehicle interaction. He is one of the general chairs of the Auto-UI 2021 conference. yongguji@yonsei.ac.kr
View All Yong Gu Ji's Posts

Ignacio Alvarez is a senior research scientist at the Autonomous Driving Research Lab in Intel Labs, where he develops software, system, and simulation Tools to accelerate the adoption of safe automated driving technologies. Previous to Intel, he worked for eight years at BMW, leading R&D and product development for advanced driver assistance systems, vehicle telematics services, and user interface solutions in Europe, America, and Asia. He received his international Ph.D. in computer science from the University of the Basque Country (Spain) and Clemson University (U.S.) in 2011. His research is focused on the development of intelligent connected automated vehicles that augment human mobility with safer and more enjoyable experiences. ignacio.j.alvarez@intel.com
View All Ignacio Alvarez's Posts

Shan Bao is an associate professor in the Department of Industrial and Manufacturing Systems Engineering, University of Michigan-Dearborn, and an associate research scientist in the University of Michigan Transportation Research Institute. She received her Ph.D. in mechanical and industrial engineering from the University of Iowa in 2009. Her research interests focus on human factors issues related to connected and automated vehicle technologies, and big data analysis. shanbao@umich.edu
View All Shan Bao's Posts

Myounghoon Jeon is an associate professor of industrial and systems engineering and computer science at Virginia Tech. He received his Ph.D. in engineering psychology and human-computer interaction from Georgia Tech. His research is dedicated to designing better interactions with robots and vehicles with focus on sound and emotion. He was the diversity and inclusion co-chair of the Auto-UI 2019 and 2020 conferences, and is the general co-chair of the Auto-UI 2021 conference. myounghoonjeon@vt.edu
View All Myounghoon Jeon's Posts

Linda Ng Boyle is a professor at the University of Washington. She is a co-organizer of the International Symposium on Human Factors in Driving Assessment and on the steering committee for Automotive User Interface. She is a co-author of the book Designing for People: An Introduction to Human Factors Engineering. linda@uw.edu
View All Linda Boyle's Posts

Stella F. Donker is an associate professor of experimental psychology at Utrecht University. She received her Ph.D. in medical sciences from the University of Groningen (2002). She is interested in human movement, attention, and human-machine interaction. She was one of the general chairs of the Auto-UI 2019 conference. s.f.donker@uu.nl
View All Stella Donker's Posts

Lewis L. Chuang is an Akademischer Rat at the Institute of Media Informatics at LMU Munich. He received his Ph.D. in behavioral neuroscience from Eberhard-Karls-Universität Tübingen. He investigates mechanisms of focused attention and reorienting, especially in the context of human-machine interactions. He relies extensively on gaze tracking, EEG, and psychophysics in his research. He is co-organizing the 2020 Neuroergonomics Conference. lewis.chuang@lmu.de
View All Lewis Chuang's Posts

Wendy Ju is an assistant professor at the Jacobs Technion-Cornell Institute at Cornell Tech and in the Information Science field at Cornell University. She has innovated numerous methods for early-stage prototyping of automated systems to understand how people will respond to systems before the systems are built. She has a Ph.D. in mechanical engineering from Stanford, and a master’s in Media Arts and Sciences from MIT. Her monograph The Design of Implicit Interactions was published in 2015. wendyju@cornell.edu
View All Wendy Ju's Posts

Andrew L. Kun is professor of electrical and computer engineering at the University of New Hampshire. His primary research interest is in-vehicle human-computer interaction. He serves as the ACM SIGCHI interim vice president for conferences, and as steering committee co-chair of the ACM AutomotiveUI conference series. andrew.kun@unh.edu
View All Andrew Kun's Posts