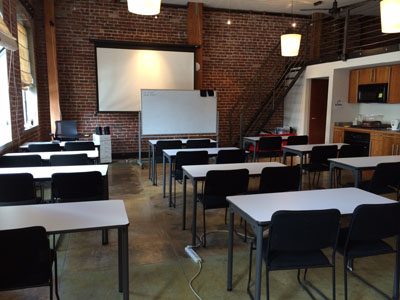 My teaching partner Mandy and I stood in silence looking around the room one last time in which magic had happened the preceding 10 weeks. We teach the UX Design immersive for General Assembly in San Francisco. 10 weeks, 5 days/week, 8 hours/day of teaching and learning, of intense, hard work, of struggle, of laughter, of transformation, of bonding that will last forever. Educational experiences don’t get any better than this.

The UX Design immersive is intended mostly for people wanting to make a career transition. Students make a huge commitment by signing up for the course, stopping whatever they were doing prior, and in some cases, traveling long distances to do one thing: to become a UX designer.

General Assembly is one of several new educational institutions that are slowly disrupting the higher education space. Jon Kolko has identified the following qualities shared by many of these institutions’ programs:

As described by Jon:

“Students who graduate from these programs have a body of work that they can point to and say ‘I made those things.’ This makes it very easy to understand and judge the quality of the student, particularly from the standpoint of a recruiter or hiring manager.”

“These educators have a deep and intimate understanding of both the material that is being taught and the relevancy of that material to a job.”

Given the increasingly heard argument that academic programs are not producing the kinds of designers needed most by industry (see, for example, "On Design Education")… And given that 90% of UX Design immersive students secure jobs within 90 days of the end of their cohort... (I might be moderating a panel contrasting different institutional instructional models at the Interaction 15 Education Summit in February.)

What is it like teaching the UX Design immersive at General Assembly? To get a sense of this, read the Interactions magazine blog post written earlier this year by our fellow UX Design immersive instructor in Los Angeles, Ashley Karr, entitled, “Why Teaching Tech Matters.” Also, Mandy and I might be conducting a mock classroom at the Interaction 15 Education Summit in February to give attendees a mini-experience of the immersive program.

Tears filled the room on the final day of the course. We all had put everything we had into the preceding 10 weeks, and we could not help but be emotional. We hope the magic will happen again when we teach the course again in December. But it all will happen in a different space (a new campus opens tomorrow), and Mandy and I will be paired with other instructors instead of each other.

But we will do it again, and we will try to do it even better.

Congratulations and very nice, Richard. Almost makes me wish I was still a practitioner so I could join in. I hope you find a way to franchise this.

Hello! Thanks for writing this - and thanks for the shout out. This is a very good article to reference when folks asks questions regarding types of programs they should look into re: career changes and continuing education. Good luck with your next round!