Among the teaching that I've done: UX management courses and workshops via the University of California Extension, during conferences, and in companies. And a topic I have always addressed therein: What holds UX back and propels UX forward in the workplace—or to put it another way, what increases and what decreases the influence of UX on businesses.

Last month, Dan Rosenberg authored an interactions blog post in which he states that a root cause for a lack of UX leadership in business decisions relates to "how the typical types and methods of user research data we collect and communicate today have failed our most important leadership customer/partner/funding source, the corporate CEO." (Dan will be elaborating on this in the March + April 2013 issue of interactions.) In my courses and workshops, we identify all sorts of reasons UX isn't as influential as it might or should be, and we often do so in part via use of a simple "speedboat exercise," as I described in a UX Magazine article entitled, "What is Holding User Experience Back Where You Work?" (A variation of the exercise can be used to help identify what has propelled UX forward in workplaces.) 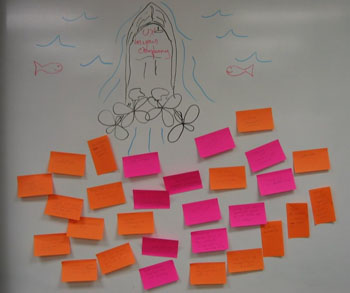 I've also often addressed this topic in my blog, sometimes referring to discussions that occurred during my management courses or during conference sessions. For example, course guest speaker John Armitage made the following point:

"There is only so much air in the room—only so much budget, head-count, attention, and future potential in an organization. And people within the organization are struggling to acquire it—struggling for power, influence, promotion, etc., whether because of ego or as a competitive move against threats of rivals. People will turn a blind eye to good ideas if they don't support their career and personal objectives. Hence, if user experience is perceived as a threat, and if they think they can stop it, they will, even if it hurts the company."

Guest speaker Jim Nieters addressed the role that the positioning of UX personnel in an organization plays:

Organizational positioning and the type of user research conducted were two of the factors debated by a stellar panel of UX executives and managers I assembled for a CHI conference session entitled, "Moving User Experience into a Position of Corporate Influence: Whose Advice Really Works?"

We also addressed this topic in interactions articles published when I was the magazine's Co-Editor-in-Chief. For example, in "The Business of Customer Experience," Secil Watson described work done by her teams at Wells Fargo Bank:

"We championed customer experience broadly. We knew that product managers, engineers, and servicing staff were equally important partners in the success of each of our customer-experience efforts. Instead of owning and controlling the goal of creating positive customer experience, we shared our vision and our methods across the group. This was a grassroots effort that took a long time. We didn't do formal training across the group, nor did we mandate a new process. Instead, we created converts in every project we touched using our UCD methods. Having a flexible set of well-designed, easy-to-use UCD tools ... made the experience teams more credible and put us in the position of guiding the process of concept definition and design for our business partners."

Forming the centerpiece of their UCD toolkit: an extensive user research-based user task model. The influence of the use of these tools extended to project identification, project prioritization, business case development, and more.

I encourage managers to employ the speedboat exercise to prompt diagnosis and discussion in their own place of work. Also, peruse my blog posts and past issues of interactions for more on factors that impact the influence of UX. And give particular thought to the role user research might play; along these lines, look forward, with me, to what further Dan Rosenberg has to say in the March + April issue of interactions.