Note: This blog post was co-authored by Lone Koefoed Hansen from Aarhus University. She works with feminist design, critical computing, and participatory IT.

At CHI 2017 we ran a workshop to reimagine how technology intersects with women’s health. We brought together designers, engineers, programmers, and experts in women’s health over two days in an attempt to radically re-engineer the ways women receive healthcare. We made use of the excellent public maker spaces in Denver’s Central Public library (https://www.denverlibrary.org/idealab) to build exemplary digital interactions that demonstrate the kinds of innovations we consider necessary to improve women’s health on a global scale.

Throughout our two-day event, 25 participants developed many responses—participants built an inclusive parenting digital campaign, hacked sex vibrators, experimented with personal visualisations of menstrual cycles, discussed technologies for menopausal women, talked about what it means to be inclusive and exclusive of gender norms, and cultivated various yeasts in a cheap incubator. We put the needs and hopes of people who identify as women front and center for two days and through this, we realized just how rare it is to do so without having to explain why. 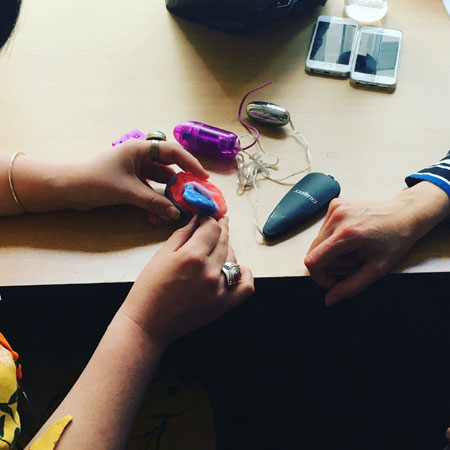 Our workshop could not have come at a better time. One of President Trump’s first acts was to cut funding to international organizations that promote women’s health if they also offer access to abortion services, or even provide advice and information to women about these abortion services. The NGOs affected have highlighted how such an act will decrease marginalized people’s access to vital sexual and reproductive health services, and of course increase illegal abortions and ultimately mortality. Times are hard, but there are ripples of action being taken globally, from the #Repealthe8th campaign using humor to draw attention to lack of abortion services in Ireland; the Pussy Hats project, which creates a visual symbol for those advocating for women’s rights in a context of everyday sexual harassment; and the “reproductive justice” hack-a-thon that took place in March this year. At an institutional level, some country’s leaders readily identify as feminist (hello, Sweden and Canada) and some countries have begun to officially recognize non-binary genders in passports. Even CHI 2017 had a few gender-neutral restrooms.

However, it's also not easy to do research in an area, when the majority of the field think it is only relevant for a minority. We are acutely attuned to how the current political and social climate impacts our work. We notice how a workshop on “hacking women's health” makes it/us counter- or anti- just by naming it "women's health," even if half the world's population identify as female. We have been innovating digital technologies for women’s health over a number of years, through the relatively innocuous FeedFinder (supporting women in breastfeeding in public), to perhaps the more radical and confident Labella (developing awareness of intimate anatomy). So, by hosting this workshop at CHI we hoped we could not only contribute to these global ripples of action and resistance, but also increase the community, profile, and voice of researchers working in this area. Because, right now—we’ll be honest—it can be hard to be working on this topic. Reviewers have told us that our research is “not science,” is “not ethical,” is “unseemly,” is “not feminist,” or is “too feminist.” In contrast to research we have undertaken in other areas, it seems to us that this work is often held to a higher standard; more is required of us to prove it is worth publishing, or that it is even research at all. 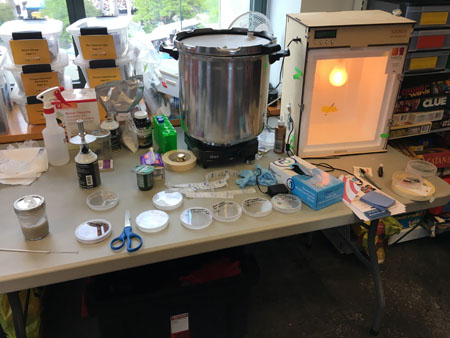 A portable bio lab that one group used to practice sterilization and culture
yeast whilst discussing internet memes, zine culture, and other feminist tactics.

And, this has been our experience of trying to investigate women’s health at SIGCHI venues since running the “Motherhood and HCI” workshop at CHI 2013. There, we had conversations with other attendees who wanted to spend their research time contributing to agendas around women’s health and motherhood, but who couldn’t quite find the right way to persuade their research groups and organizations to allow them to research such topics. Or those who had to invest in long discussions as to why a topic that “only” affected women was worthy of more than a smile. Somehow thinking about women’s health and the female body is considered daring and brave, and somehow, designing for the intersection between technology and the women’s body is taboo. It sits on the fringe of CHI, and it absolutely shouldn’t. There are untold opportunities for technical and interactional innovations through focusing on women’s health. Those thinking about on-body and wearable computing might find their “killer apps” exactly within this space. There are rich opportunities for designing for advocacy and activism, alongside extremely complex and sensitive settings that are entirely unchartered within the community. We need to find ways of making this type of research mainstream, because the potential for HCI to create positive impacts for women globally is great.

But why is it so hard to legitimize work in this area? Well, this year we think we’re starting to understand. We are passionate about women’s health and women’s access to healthcare services, and angry that this access is being limited and that women’s lives are at risk as a result. We’re angry enough that we wanted to use our hacking women’s health workshop as an opportunity to not only talk about our research, exchange ideas, and be creative, but to generate impact outside our community. We thought it would be fun and useful to use activities in our workshop as a way of fundraising for Planned Parenthood, and plans were hatching for all sorts of crafts that we could sell at the conference to generate some small donations to this essential women’s and sexual health NGO. However, we were unable to do this since fundraising for any particular cause is not permitted at SIGCHI conferences. 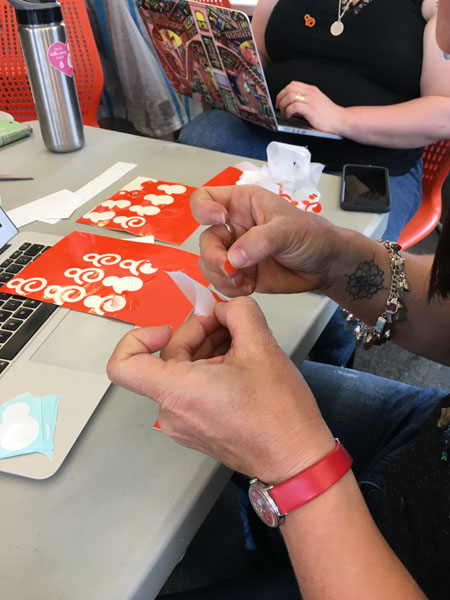 In the inclusive parenting group, participants are working on the (digital)
campaign material that came as a result of the discussions beginning with
breast-feeding discussions.

In the last couple of years, the CHI conference has run CHI4Good days of service. The thrust of these days has not been to raise funds, but to offer time and support (technical, design, research, and otherwise) to selected charities as part of the conference. This is a great way of ensuring meaningful impact for the wider global community. But we wondered why it was that CHI could support charities in these ways, and not others. The answer we received was that charities had applied and been chosen in advance of the conference, and that organizations would not have been selected for CHI4Good if considered to be of a “polarizing political nature.” So is Planned Parenthood too politically polarizing? Can CHI and its attendees contribute to charities and organizations as long as they are considered not too divisive? Animals, children, cycling, yes? Reproductive rights and providing healthcare to women with limited recourse to funds, no? By limiting the organizations we can work with during SIGCHI events, do we limit the impact of the community and potentially marginalize the organizations and charities that need support, in favor of those which are potentially perceived to be more agreeable? And please don’t misinterpret our frustration here. We are not arguing that children, animals, and cycling are not important and do not deserve support. We are simply questioning the biases that this raises not only in who we support as an association, but also who we decide we can do research with, which topics are OK to research, and which are not. 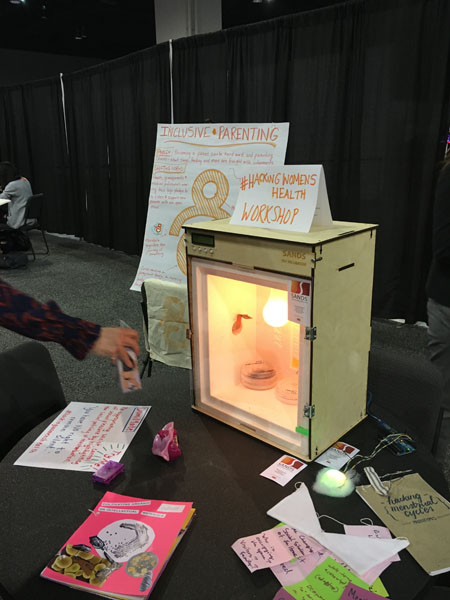 The workshop "hacked" the exhibition space at the opening reception by
installing the results from the workshop on a table next to an ice-cream stand.