Letter from Aarhus: scale and perspective


In addition to appreciating the ways in which Denmark has a design culture, which I wrote about last time, I am also appreciating not being in America, in two ways. One way is perspective. Although I read the New York Times every day, I am somehow freer of media pressure here. This shows up in a funny way. When I watch The Daily Show With Jon Stewart at home, I experience it as a relaxing way to end the day. He and his team say the things publically that I want to hear said—publically. “Thank god, that piece of business has been taking care of, I’m not the only one who thinks it, and now I can go to bed!” But, in Europe, Jon Stewart becomes the source of the anxiety. Wow! I had no idea that I was carrying such a burden on a daily basis. The Danes have had gay marriage since 1989. Imagine what discourses we could have been having in America if we had not had to spend the past twenty-four years arguing about this. They have had national health since 1973—single payer health insurance. Imagine if we could truly focus on the design of software for the provision of care rather than as a political football.

So perspective is one source of relief. Another is small scale. A number of researchers here at Aarhus have put together a grand steampunk-like machine, 5+ feet high, with industrial cogs on a platform supporting a thick metal bar, called Ekkomaten (“Echo machine”). From the bar sprout three elements that look like speakers and dangle runners that lead to headphones. It is meant to be planted in a public space and then, with effort, rotated. People listen over headphones and what they hear depends on where the device is and the direction that it faces. That is, stories and sounds are recorded that have to do with the exact location of every installation, so the device is both general and specific. Some of the stories are historical, told by people who live in the area, in the direction that the Ekkomaten currently points. Some are memories, and some are contemporary. And some are just sounds, like coins being tossed onto a dresser or coffee being poured and cups clinking while people murmur. If there are multiple listeners, they have to cooperate to decide on a direction. The localization of the device is very important to the team of creators, who repeatedly mention that these are “Aarhus voices” and then repeatedly (!) have spirited discussions about how many different accents there are in Denmark (are there 4? 5? 6?). 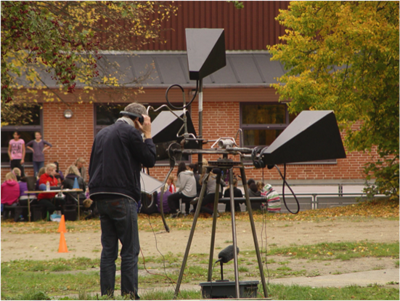 On one hand, Denmark has only 5.8 million inhabitants and occupies 1/5 the area of the American state of Virginia, so such fine cultural differentiation can seem like pretty small potatoes. But then, again, aside from potential for commercialization, what is more important? Here are people living in a place that is important to them, with cultures that are important to them, and here is a device that allows them to reflect—perhaps with enjoyment or with other important emotions—on what they have and are making. In this way, it’s like the American National Public Radio’s Story Corps, which is “to provide Americans of all backgrounds and beliefs with the opportunity to record, share, and preserve the stories of our lives,” but unlike Story Corps, it wanders through time, and it does not just abstract, but also points back to the place of origin. How interesting this is! This is the stuff of people’s lives. And because it does not try to speak to everyone on the planet, it speaks to me.

Now, as it happens, I don’t speak Danish. So I cannot understand the stories, and experienced the device at a different level than most people. Even though it is for the creators a locally focused creation, it brought me into contact with the shared, sense-making information contained in unparsable, human sounds. I did not understand the stories, but I understood the story-telling. I found myself noticing sounds that structure our days and experience. I don’t own them, but I appreciate them. And I immediately knew quite a lot about the situation.

I had a comparable experience watching Christian Marclay’s amazingly compelling piece, The Clock, last summer. The Clock is a work of art, a 24-hour film montage in which every minute is drawn from a film that shows a clock or a watch displaying that time. It plays so that each minute in the movie corresponds to the real local time (which is one of several reasons that you should boycott pirated YouTube clips). Films that you know and half know and films that you have never seen tick by, each one opening up a larger world of narrative from within that minute. As it happens, I got to watch only from 5:00am to 7:00am. Evidently, people even in films are pretty much doing a small set of things between 5 and 7. They are sleeping, waking up, not waking up when they ought to, leaving their own beds, leaving someone else’s bed, washing their faces, eating breakfast, drinking coffee. Exceptionally, they are looking out the window, waiting for a train, calling a taxi, roaming deserted streets. And, also one regularity of modern urban life is the elephant-like progression of garbage trucks lumbering along down dark, wet streets. As I would later experience with the Ekkomaten, I was stunned by the enormous regularity of life and its portrayal through media. I left The Clock to go get a substantial American breakfast of eggs, toast, and coffee (sizzle, pop, slurp), with the cheery thought that even horrible no-good-niks pee when they get up in the morning.

So, returning to my theme, by stepping outside of my context, I am brought more into contact with the evanescence of scale and perspective.

Hi Deborah (and others),
You should take your time and listen to the Danish female musique concrete composer Else Marie Pade. In particular her “Symphonie Magnetophonique” springs to mind when reading your account above. It portrays 24 hours in Copenhagen in the 1950s. It can be heard in its entirety (20 mins) from the bottom of this page (Flash needed): http://dvm.nu/theme/emp/symphonie-magnetophonique/