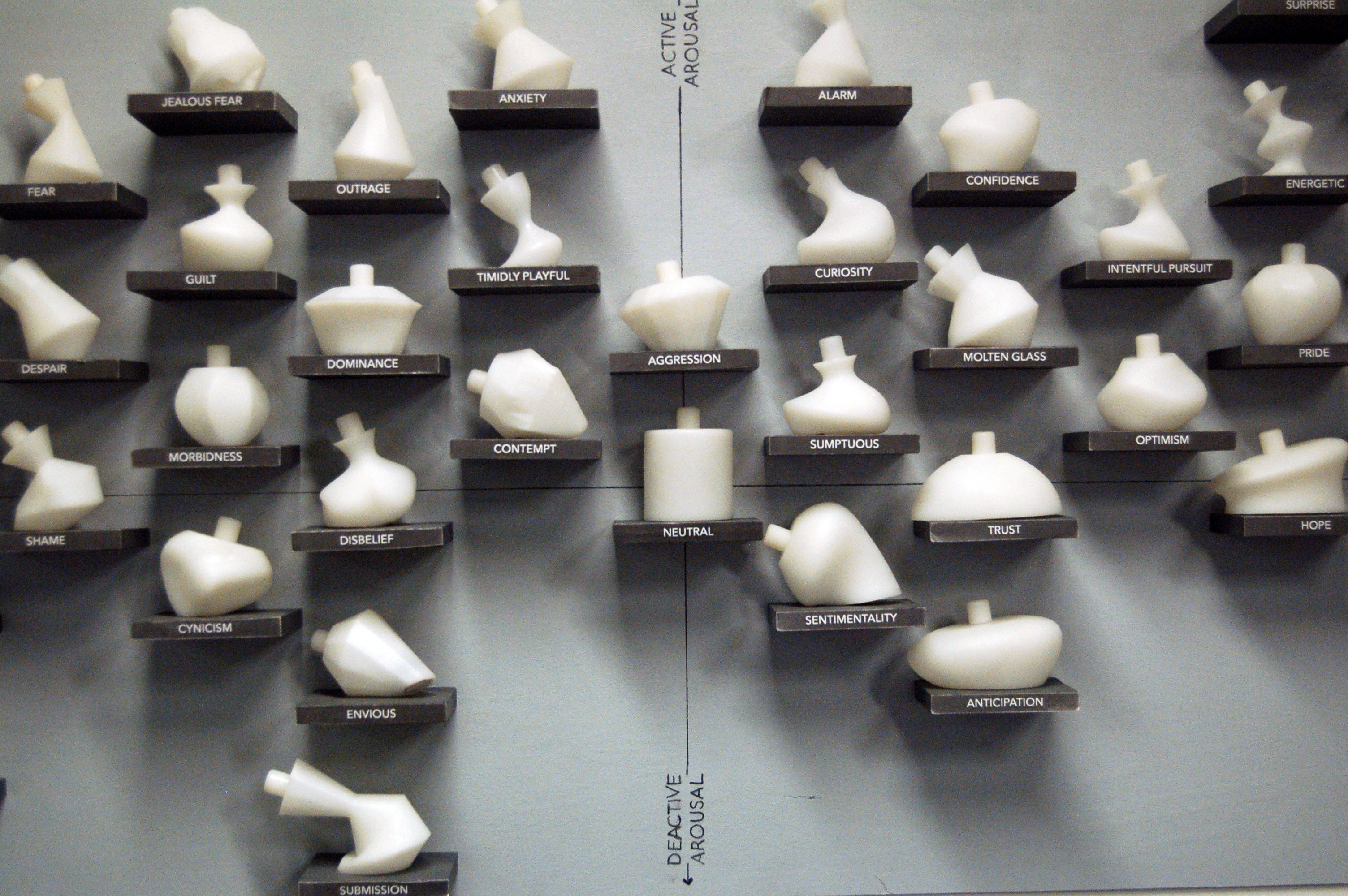 Describe what you made. The EmotiveModeler is a CAD tool that takes advantage of our intuitive perception of the meaning embedded in objects. It allows designers to use words to create objects whose forms communicate emotive character. Imagine, for example, the simple cylindrical bottle full of spicy chili pepper sitting in your spice cabinet; it could be transformed into a more evocative, spiky, angular form simply by entering the word fiery and selecting a range of emotions related to the description!

Briefly describe the process of how this was made. As a product designer, I create objects whose forms communicate various emotive experiences. However, my experience working in multidisciplinary teams highlighted that not everyone is conversant in this "language" of design; novice designers may not have the expert skills required to create 3D forms that convey the emotive character they want to express. We created the EmotiveModeler to make this early part of the design process—where a designer understands what sort of forms will best convey the meaning they want—easier for beginners by using a language that everyone understands: words.

Building on existing shape-perception literature, we developed an emotive-form design taxonomy for eight primary emotions: anger, joy, fear, surprise, trust, anticipation, disgust, and sadness. The 3D forms created to evoke these emotions were broken down into various quantitative design attributes, such as the aspect ratio of the form or smoothness of the surface, which were then integrated into the modeling functions of the Rhinoceros CAD software. When a designer types a word into the EmotiveModeler to manipulate a simple 3D model such as a bottle, the system analyzes which primary emotions are associated with the word and combines the relevant design parameters to modify the form to reflect the emotive character of the word.

What for you is the most important/interesting thing about what you made? The fascinating part of my research is trying to decode the mappings in a designer's thought process. The emotive-form design taxonomy is this key translation system that allows novice designers to interact more intuitively with a CAD program, inputting abstract verbally described ideas and outputting the appropriate design attributes to generate an emotively shaped 3D model.

Was this a collaborative process and if so, who was involved? Yes, a crucial part of developing the EmotiveModeler was getting feedback on the emotive forms it generated: Did other people actually perceive them as the emotive character we predicted? Designers and non-designers participated in many user studies that helped us improve the taxonomy to better reflect how people actually perceived the forms—something we are hoping to automate more using machine learning in future prototypes.

What was the biggest surprise in making this? Initially motivated by how the EmotiveModeler could aid novice designers, we were pleasantly surprised to find that professional designers liked using it too, particularly how they could very quickly generate a huge range of expressively shaped designs to inspire their final creations.

What is the one thing about making this that you would like to share with other makers? When making a design tool, it's important to find a balance between computation and human creativity; we did not want to create the artificially intelligent design machine! We tried to achieve this in the EmotiveModeler by allowing the designer to modify the emotions (and therefore forms) associated with their inputted words to reflect their personal interpretation, enabling a more creative conversation between the designer and their tool.

Figure. The Rhinoceros 3D-modeling software and its Python scripting functionality was used to create the custom EmotiveModeler plugin.

Figure. The emotive-form design taxonomy and models of the eight primary emotion forms.

Figure. A small selection of the many emotive forms generated by the EmotiveModeler that were used in the user studies.

Figure. The EmotiveModeler in use by a novice designer.

Figure. A user study participant evaluating the emotive forms on both an online survey and by handling 3D-printed models.

Data and Its Street Life