Cities have long been a center of attention for modernization projects, so it is no surprise that most of today’s computing ventures are choosing cities as the main avenue for demonstrating their prowess. The idea of a “smart city,” for example, has been attracting a wide range of academics and practitioners in computer science and related fields whose works concern sensor systems, smartphone applications, human-computer interaction (HCI), computer supported cooperative work (CSCW), social computing, ubiquitous computing, data science, and artificial intelligence (AI). Related to the dream of smart cities are the dreams for driverless cars to claim the city streets, drones to deliver food to city apartments, and large-scale smart displays to inform and entertain citizens.

These dreams are also being partially realized in various cities around the world, with a mix of successes and failures. In fact, it would not be an overstatement to say that computing technologies often define what cities are in today’s world. While the concentration and intensity of dazzling, cutting-edge computing is generally higher in cities in the Western world, their Global South counterparts have started to catch up. Under the government mandate of digitization, countries like Bangladesh and India, for example, are updating their cities and the lives of their citizens with new mobile applications, biometric identity, the digital gig economy, online education, and social media, to mention just a few. However, this rapid advancement of “urban” computing is often devoid of ideas of faith, religion, and spirituality; even worse, their insensitivity to such sentiments is creating an agonistic and uncomfortable situation for many citizens, especially in the Global South. A deep understanding of the historical conflicts between modernity, science and technology, and urban religiosity is required to trace the role of computing within this tension.

Let’s go back a couple of years, when Covid started to unfold in Bangladesh. Alarming images of Bangladesh shared on social media included photos of religious gatherings of faith-based communities. Here, we use a broad definition of religion that incorporates both organized religions (Islam, Hinduism, Buddhism, Christianity, etc.) and traditional and Indigenous beliefs and non-beliefs. By faith-based communities, we refer to the groups of people who participate in activities that are motivated by their religious beliefs. While faith may influence and shape every action taken by a person, for the sake of simplicity, we define religious practices by the activities that are driven primarily by religious motivations (e.g., prayers, congregations, etc.).

While the government of Bangladesh mandated “social distancing,” and there were nationwide campaigns to create awareness among people to avoid crowds, those suggestions were often not effective in practice, especially among faith-based communities. In many places in the country, including major cities, huge religious congregations kept taking place at mosques during Friday prayers, ignoring all cautionary notices. At one point, when the city authorities closed mosques and asked people to perform their prayers at home, many Muslims started to gather on their rooftops to perform their prayers (Figure 1) in jamat (groups)—the call for social distancing kept getting ignored. In mid-April 2020, thousands of people gathered at the funeral ceremony of a local influential religious leader in the Bramhambaria district, ignoring the strict ruling against such gatherings. Then, in the month of Ramadan, the nation feared a spike in the number of infected people as a series of religious festivals, including Shab-e-Qadr, Jumatul Bida, and Eid ul Fitr, were forthcoming. Those tensions between the city and religious communities allowed us to see the politics around the formulation of modern cities and the historical struggle of the religious identities within them.

While modernity is often defined by a set of values, processes, technologies, and the time period when scientific revolution, industrialization, and capitalism rapidly expanded across the West, urban modernity is characterized by the adoption of modernist ideologies in the urban built environment and as a tool to respond to emerging social and political tensions. Predominantly concentrated on the modernity-driven urban development strategies and planning policies engendered in the West, urban modernity is also globally understood as a product of secular institutions, practices, and discourses [1]. A major portion of this scholarship was developed in the 19th and 20th century, which read cities through the lens of scientific rationality and measured a city’s performance against a scale of “industrialized progress.”

With the theorization of the Global City in the 1980s, this new paradigm of modern urbanism started to expand beyond the West and influence the spatial, political, and economic readings of modern cities worldwide. These scholarly and design practices reinforced the qualities of Western modernity as the standards of a successful, global, modern city. In the late 20th and early 21st centuries, scholars such as David Harvey, Edward Soja, and Saskia Sassen mapped urban-spatial responses around global flows of capital, technology, information, and other streams, pointing toward the failures of such modernist advancement at different scales in an urban setting. Soja, Jane Jacobs, Susan Fainstein, Leonie Sandercock, Lisa Peattie, and many others shed light on different forms of social inequalities and injustices that were introduced by modern cities. Although it was not at the center of their criticism, the Western concept of modernity has also always upheld the idea of secularization, and there has been a predominant secular spirit among modernist planners and scholars toward understanding cities.

While the cities in the Global North have often relied on their secular institutions, one cannot understand the cities of the Global South, especially South Asian and African cities, without understanding their religious spirit. However, the externalization of religion to the core discourse characterizes the development of modern South Asian and African cities of the recent past [1]. Hence, the cultural pluralities and the alternative visions of modernity that could develop in this part of the world, which have the potential to generate a dominant body of knowledge in urban studies, are often marginalized [2]. Such marginalization not only hampers the tolerance and productive public engagement of people from different religious backgrounds [3] but also limits the scope of “vernacular” development in the cities of the Global South. 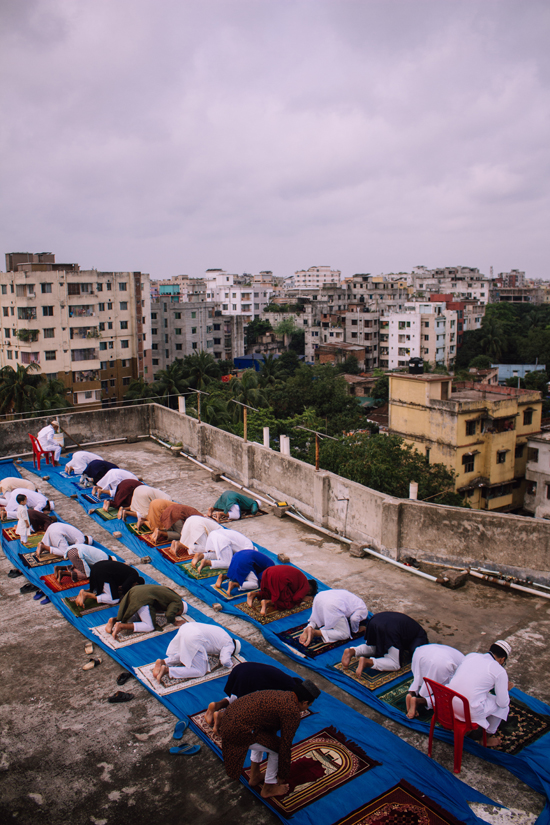 Figure 1. Religious people praying on the rooftop of a building after praying at the mosque was halted. (Image courtesy of Rubayet Tanim)


As a Global Southern city with a strong religious backdrop, Dhaka, the capital of Bangladesh, is often considered a “non-modern” city. To achieve the Global City aesthetics, Dhaka like any other developing city in many respects, attempts to abide by the “rules of modernity” that were developed in the West. Hence, the urban religions often remain outside the development discourse. The presence of religiosity therefore gets limited, neglected, and often ridiculed outside spaces of worship such as mosques, temples, churches, and pagodas. For instance, when a mosque in a neighborhood starts to be treated as merely another “building,” the much-needed socioeconomic and spatial connections between the city and the religion are overlooked. The associated design conversations fail to capture how the “donation box” placed at the entrance of a mosque and the business of informal vendors standing outside the entrance are deeply integrated with the complex network of the city’s economy. It fails to understand how a low-income rickshaw-puller feels when he wants to pray his afternoon prayer but can hardly find a secure place to park his rickshaw near the mosque. Hence, the conversations fail to address the challenge of better handling the traffic during any religious events within or around the city. Since Dhaka is a Muslim-majority city, we are focusing on examples of Islamic practices here. In reality, such spatial and socioeconomic marginalizations can be traced in other religious practices as well.

Modern cities also put limits on religious rituals, and this soon escalates to a contention between the city and its religious citizens. When religious communities feel that the city is being “developed” without including their input, they start developing resistance and try to hack into various spatial arrangements of the city to make their presence visible. Keeping urban religion outside the prominent design discussions results in different infrastructure-level failures as well. For instance, severe traffic gridlock occurs in Bangladeshi cities before Eid ul Fitr, when a huge number of rural people temporarily visit to collect zakat (financial help from the rich obligated by Islam). Similar spatial complications occur during the congregational religious event Biswa Ijtema, where millions of Muslims gather to empower their Muslim identities. If the city development plans incorporated such religious festivities with due significance, Bangladeshi cities like Dhaka would have been developed in a distinctively inclusive way.

The borrowed concept of modernity, on the one hand, has limited possible design conversations with faith-based groups. On the other hand, excluding religiosity from the dominant urban design and planning decisions has created additional pressure on the city’s infrastructure. When the connections between the city and religion become parochial, it becomes quite difficult to expect thoughtful, tolerant responses from the marginalized faith-based communities during emergencies such as the Covid-19 pandemic. Hence, every now and then we observe alarming crowds at religious gatherings in South Asian cities, defying lockdowns and mandatory social distancing. These crowds are not an immediate “unthoughtful” response to the pandemic situation, but rather simply the result of a deeply rooted resistance to the city’s “secular interventions.”

This brings us to the point where we can think of urban computing in a broader perspective. The discourse of “smart cities,” in both the West and the Global South, lacks a discussion on how to incorporate religious practices. If a religious practice is essentially communal, such as adhaan (Muslim prayers), how should the city strike a balance between the individual choice of not listening and the communal choice of hearing the sound? How is the city supposed to respond to the massive inflow of people, material, and livestock during religious festivals that challenge its infrastructure? If digitization develops a physical distance between people, how does that affect religious practices? How is the liberal, nonhierarchical model of online social media affecting value-laden religious communities? More importantly, how safe are the digital spaces for religious people? These and many other questions are critically important, and yet rarely discussed in the domain of urban computing.

We identify faith, religion, and spirituality as an underexplored territory of HCI in general, and urban computing in particular. Computing’s historical alignment with science, technology, and modernity has made it difficult to capture such sentiments, which are built upon belief, respect, tradition, fear, and purity. Furthermore, computing technologies, when acting as a force of modernization, often end up silencing and marginalizing the voices of religious communities by creating a “secular” space. However, a new paradigm of HCI can be imagined that challenges this top-down modernist program by strengthening the voices of marginalized religious sentiments.

Syed Ishtiaque Ahmed is an assistant professor of computer science at the University of Toronto. For the past 12 years, he has been conducting ethnography and design research with various marginalized groups in the Global South. ishtiaque@cs.toronto.edu
View All Syed Ishtiaque Ahmed's Posts