Dave deBronkart (a.k.a. e-Patient Dave) is quite well-known for his assertion during a TED talk and at other times that patients are the most underutilized resource in healthcare. Without question, that underutilization extends to the healthcare and patient experience (re)design process.

At Medicine X 2013, Sonny Vu ruffled some feathers when he said that, in his company's design process for wearable sensor products and services, they don't ask users what they need or want, but rather observe user behavior. Attending the conference was a large contingent of ePatients who have done a lot of work identifying what they need and want and then doing something about it (see my "Learning from ePatient (scholar)s" blog post). In no time, Sonny was challenged by ePatients in the audience, and the controversy became a point of significant discussion among the ePatients after that session.

This is an issue that comes up often, and in my UX teaching I share and contrast views that you do ask users what they need and want with views that you observe user behavior instead. 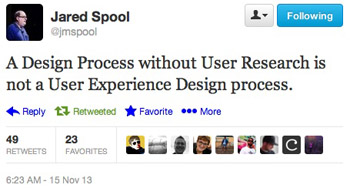 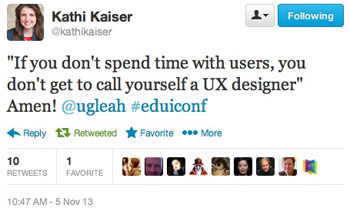 But what can you learn from spending time with users? User experience design researcher Catalina NaranjoBock tweeted a partial answer, echoing an assertion made by Sonny Vu: 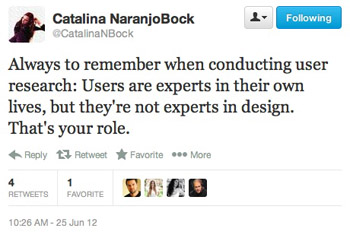 Karen Holtzblatt has written often about this, but she goes further:

Don't ask your customer what they need or want or like. People focus on doing their life. So if you ask them outright, people can't tell you what they do or what they want. It's not part of their consciousness to understand their own life activities.

Yet, in the world of patient experience, views such as Ann Becker-Schutte's are being expressed: 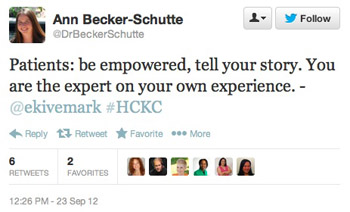 And in the experience design world, co-design—the involvement of the user or customer in the design process as designers—is increasing in popularity.

So how should one proceed?

IDEO's Dennis Boyle is among those who argue for the need to focus design research on edge cases: 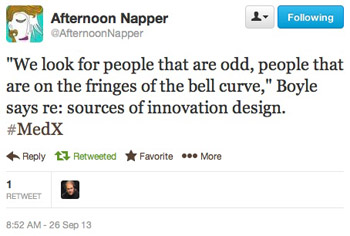 John Hagel, co-chair of the Deloitte Center for Edge Innovation, makes a similar argument, stating that one should explore emerging innovations on the edge that are rising up to challenge the core. In a presentation I made at HxD 2013, I pointed out that those on the edge in the world of healthcare include participants in the quantified self movement, participants in peer-to-peer healthcare, and ePatients, three groups which overlap. Quantified self participants continually document aspects of their health and experience, peer-to-peer healthcare participants actively engage with other patients about their health and experience, and as stated by Leslie Kernisan, "e-patients aren't like most patients. They're more motivated, more medically sophisticated..." One can argue that such behaviors and qualities make such people better able to know what they do or what they want or need.

But there is much to be learned from typical patients as well, and observational research might be particularly favored in such cases. Unfortunately, whether you are talking about ePatients or most patients, patients continue to be the most underutilized resource in the badly needed redesign of healthcare and the patient experience.