Describe what you made. Cell is a pneumatically controlled, body augmenting, interactive and kinetic wearable/installation that transforms in response to the user's breath. It is composed of a large number of translucent PVC balloons, each containing a yolk-like, ping-pong-ball-size, yellow nucleus. The balloons inflate in small clusters, becoming more transparent as they grow.

There are two versions of the piece: one with the balloons fully exposed, and the other with a translucent spandex skin cover.

The piece has been presented as a standalone interactive installation, and as a wearable "protagonist" within a dance performance. In installation form, it is set up with four suspended mouthpieces into which visitors breathe. The installation thus transforms as a result of interaction with the audience. In performance, the control is split between audience participants and the dancer wearing the garment.

Briefly describe the process of how this was made. The piece began with the general idea of creating an interactive artwork that would metamorphose as a result of users' breath. I created various sketches for sculptural objects, and began exploring technologies that would facilitate the type of structural augmentation I was imagining. I thought the solution should not be mechanical, but some type of pneumatic or hydraulic system. When it occurred to me to work with balloons, I began to play with and test air-control systems.

The materials and technical solutions I found helped direct my design thinking, and the idea of creating the piece as a wearable emerged. The next stages involved fabricating the wearable garment, fitting it to a performer, and resolving all the technical issues (sensor control, rate of inflation and deflation, etc.). This stage involved much user (performer) testing.

The last step of production was to redesign the wearable as an installation. The final phase of the project was exhibiting and performing the piece, and considering audience feedback to both.

What is it made of? The piece is made of customized PVC balloons, urethane air tubes, miniature microphones, and a pneumatic system consisting of an air pump, regulators, solenoid valves, etc.

What skills and tools did you use? The piece required some physical computing skills: Arduino coding, and a basic understanding of working sensors and electronics. More specifically, I also needed to learn about pneumatic systems and characteristics of air flow.

Did anything go wrong? Air is not easy to control—it changes its behavior as the conditions of the environment change. It took me time to understand that I need to calibrate the system each time I set it up. My main issue, however, was finding material that would inflate well, that would have the physical and visual characteristics I was looking for, and would be safe to wear and exhibit. I experimented a great deal with silicone and urethane, and tested fabricating the balloons myself. (At one point when I was "cooking" the material a fire broke out and my workspace filled with toxic gas.) Fortunately, and by pure chance, I came across the PVC balloon toy that I ended up repurposing for my piece.

What was the biggest surprise in making this? My biggest surprise was the performer's response to the audience participation. In the performance four very different types of couples interacted with the piece: an elderly husband and wife (see photo on this page), two young women who did not know one another, a man and a women who did not know one another, and two close friends.

The instructions I gave to the participants were to stare at each other and to express whatever feelings came to them through breath alone. Each couple had 15 minutes.

The performer/dancer could not see the participants. He could only sense the physical sensations of the balloons on the body: the pressure, rhythm of change, and size of the balloons as they inflated and shrunk, to which he responded with improvised motion.

It was fascinating to discover the variety of the performer's responses, and to learn how emotionally evocative he found the "translation" of the different breathing patterns to the wearable apparatus.

How would you improve on this if you were to make it again? I would explore ways of making the interaction subtler. I would also try to make the piece lighter and look at alternatives to the air-compressor control system: The compressor I used had a limited pressure capacity and was generating too much noise. It required isolating the compressor in a separate space.

Figure. A look inside the main control box. 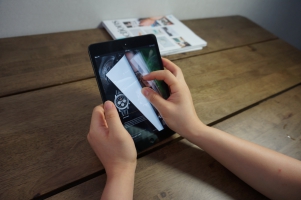 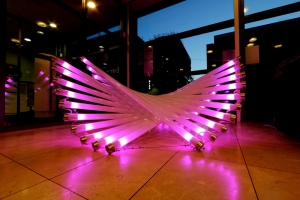 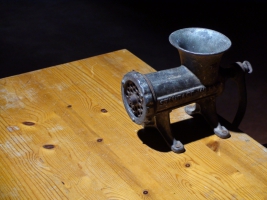 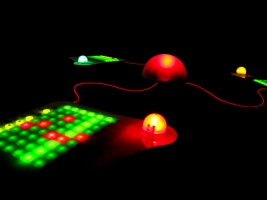